CIO survey dispells mass deployment of the technology as hype 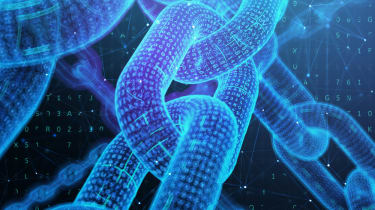 Blockchain technology is only being fully deployed by 1% of chief information officers (CIOs), according to Gartner.

In its 2018 CIO Survey, the research firm revealed the little interest in blockchain-related projects or systems within organisations and listed that only 8% are looking at short-term plans or experimentation with the technology.

Furthermore, 77% of CIOs believe their companies have no interest in the technology at all and have no plans to develop any uses for distributed digital ledgers.

Gartner's vice president and fellow, David Furlonger believes the findings prove Blockchain deployment is overhyped and that there is a 'maverick' nature within its developer community.

"This year's Gartner CIO Survey provides factual evidence about the massively hyped state of blockchain adoption and deployment," he said. 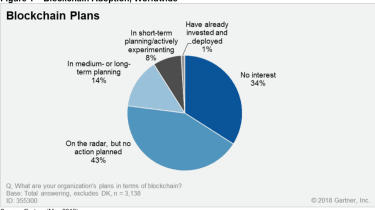 Furlonger added that rushing into blockchain deployments could lead organisations to significant problems of failed innovation, wasted investment, rash decisions and even rejection of the potentially game-changing technology.

"It is critical to understand what blockchain is and what it is capable of today, compared to how it will transform companies, industries and society tomorrow," he added.

"The challenge for CIOs is not just finding and retaining qualified engineers, but finding enough to accommodate growth in resources as blockchain developments grow.

"Qualified engineers may be cautious due to the historically libertarian and maverick nature of the blockchain developer community."

The survey queried 293 CIOs of organisations that are in short-term planning or have already invested in blockchain initiatives and found that 23% said blockchain requires the most amount of new skills to implement of any technology area, while 18% said that blockchain skills are the most difficult to find.

Gartner had previously predicted that a blockchain-based business would be worth $10 billion by 2022, but the survey suggests the transaction-tracking public ledger technology, which underpins Bitcoin, is still very much in the 'hype stage'.

There are endless possibilities in the use of blockchain and it has already been implemented by companies like IBM, Oracle and Microsoft.

The tech can be used in cross-border payments, smart contracts for the sale and purchase of assets, secure records-keeping, medical data, and the simplifying supplier history.