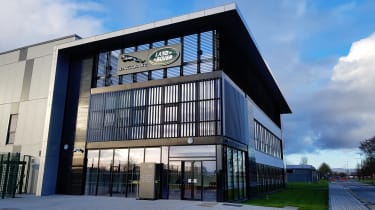 Jaguar Land Rover (JLR) is trialling software that would reward its customers with cryptocurrency in exchange for sharing car data.

The largest car manufacturer in the UK is planning to offer IOTA cryptocurrency rewards in the hope that data sharing will help improve systems for connected car services that predict traffic congestion and automatically report potholes to councils.

"In the future, an autonomous car could drive itself to a charging station, recharge and pay, while its owner could choose to participate in the sharing economy - earning rewards from sharing useful data such as warning other cars of traffic jams," said Russel Vickers, JLR software architect.

JLR has said that it's trialling the technology at its new software engineering base in Shannon, Ireland and the 'Smart Wallet' technology has already been fitted in the Jaguar F-PACE and the Range Rover Velar.

Drivers will also be able to accrue IOTA tokens through ride-sharing arrangements and the whole initiative is said to contribute to JLR's Destination Zero vision, which the company has touted as "zero accidents, zero congestion and zero emissions".

The tokens could be used for things such as paying to cross toll roads or for use at electric car charging stations.

The IOTA foundation behind the cryptocurrency chosen for the software provides a currency that works just like other cryptos, using distributed ledger technology over a blockchain network. The key difference is that it requires no transaction fees to make and receive payments and will supposedly get faster over time, according to JLR.

It believes that by 2025, around 75 billion devices will be active on the IOTA network which will include tiny sensors on cars and roads, to wearable electronics and mobile phones.

"Our distributed ledger technology is perfectly suited to enable machine-to-machine payments for smart charging, parking and tolls, in addition to creating opportunities for drivers to earn their own digital currency," said Holger Kther, director of partnerships at the IOTA Foundation. "We are excited to partner with Jaguar Land Rover in implementing its IOTA-powered car wallet, delivering a major convenience benefit for their customers worldwide."

The announcement is interesting considering that it would potentially entail revenue loss from JLR when other connected car-related blockchain technologies encourage profitability and safety.

HPE and Continental introduced us to its proposed blockchain data marketplace for cars at MWC whereby car manufacturers sign up for a service that would see them sell their customers' data to all other car manufacturers for the same purpose - to reduce congestion and subsequently road emissions.

For example, in this scenario proposed by JLR, the data traffic data would only be collected by JLR cars so only JLR customers would benefit from the real-time traffic reports and navigation re-routes.

With HPE's model, all cars on the road would submit data to the marketplace so all other cars and customers could benefit. More traffic data means faster congestion predictions and less congestion overall.

It's an interesting take on the model and one that further points to the growing idea that blockchain will form a major part of connected cars and the monetisation of data in the future.