Are we really better off as part of the EU? 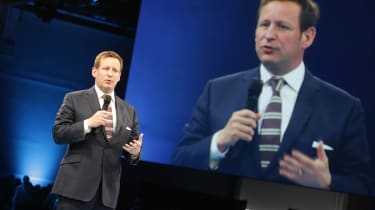 The UK is a hotbed of digital innovation and plays home to a vibrant start-up scene. However, continued success in this area could be at jeopardy if we vote to leave the EU on 23rd June.

So claims digital minister Ed Vaizey MP, who reiterated his position on remaining part of the wider union during a press Q&A at Salesforce's World Tour London event this morning at the Excel conference centre.

"There are lots of different factors that make the UK successful in this space," he told assembled journalists and analysts.

"Being part of the EU is a good thing for the UK. [We have] digital companies based in the UK and attract a lot of European start-ups, and the companies based here can draw on a great skills pool throughout the whole of Europe."

While Vaizey did reference EU membership again during a public session (asking for a show of hands and referring to a limited display as an overwhelming majority," he preferred to spend the rest of his time talking about how great the UK is generally in terms of tech and tech innovation. In particular, he referred to how vibrant the market is not just to create a business, but to then grow that business and products and services.

"One thing we do is talk about tech a lot. But I think it's important not to underestimate how important it is for a government any government to show a lead and an interest in this sector because it does tend to attract companies. Investment companies want to know what's going on here with government ministers talking about tech and supporting tech so [they say] let's go over and have a look,'" Vaizey said.

"We're building a digital infrastructure and making sure we're digitally enabled, with 4G and broadband."

On the other hand, Vaizey did highlight that not everything is going in the UK's favour and rightly acknowledged some of the key challenges facing the tech sector in particular.

"Skills [is an issue]. Every country is facing a challenge [here], but I think we have a great skills base in the UK and we're not complacent. We're constantly looking at how we reform and upgrade the skills element. We also have a good investment climate and a generally good business climate. I think the UK is a great place to start any kind of business, but I do think we have a good tax environment, particularly for start-ups," he added.

"The UK government should acknowledge the role of the British consumer. We are great adopters both at business levels and consumer levels of adopting new technologies Again, that drives a lot of tech innovation."

The minister also pledged continued governmental support for start-ups who come to our shores to do business.

"Start-ups in the tech economy do get quite significant support from the government through Tech City, which is a very good organisation. Originally, when we set it up in 2010, I was a bit sceptical of what it could do. But I have obviously become a convert," he admitted.

"The tech community is very important to our economy. It provides a very porous relationship with government the tech companies can raise their concerns and have a proper on-going dialogue with government about issues, we can bring in potential reform, but also championing tech companies, helping them to scale up and encouraging them to grow in the UK they are all factors where Tech City plays a big role."

While the minister was clearly proud of the UK's rich heritage and forward-looking ambitions relating to innovation and technological evolution, a question by a fellow journalist prompted him to be on the defensive.

The government's universal service obligation is to ensure the minimum standard for broadband speed in rural areas is a minimum of 10Mbps and during the press Q&A, he was asked whether this was really that great a thing to be celebrating.

"10Mbps is twice as high as the European recommendation and a lot higher than most other countries, many of whom don't have a universal service obligation. So I don't think that is a damp squib.' We have said we will keep it under review. We want to track superfast speeds across the UK. We don't want to leave people on 10Mbps in a few years time, say when 100Mbps might be the norm."

Vaizey continued: "But if you don't get excited about 10Mbps, you should get excited about our key planning reforms in digital. I know a lot of people down the Dog and Duck' will be talking about things like taller masts."