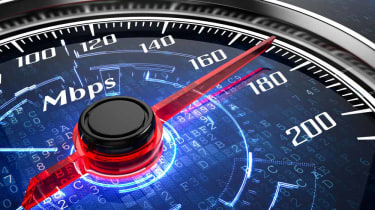 Broadband providers will soon be unable to advertise their fastest broadband speeds if they're only accessible by a small number of customers.

Under changes announced by the Advertising Standards Authority, which come into force in May 2018, internet service providers (ISPs) will be forced to create advertising that is based on download speeds available to at least 50% of its customer base at peak times.

Under current rules, the threshold for an ISP to be able to advertise its fastest speeds possible is 10% of its customer base. Research over the past year concluded that advertising of this kind is misleading for customers, with many confused by "up to" speeds that they could never reach in their homes.

The ASA expressed concerns over broadband advertising last November, saying at the time that ISPs were exploiting "low levels of knowledge and understanding of broadband speeds" among customers, with many "not knowing what speed they need to carry out daily online tasks".

These issues were raised with the Committees of Advertising Practice (CAP), which worked alongside ISPs and Ofcom to produce proposals for new standards, early results of which were published in May this year. Potential solutions included ISPs limiting advertising based on median speeds across a 24-hour period, or 24-hour download speeds available to 20-80% of the user base.

Today's decision, which will restrict advertising to speeds available to 50% of the customer base, will come into force on 23 May 2018 after a sixth-month implementation period. Part of the rules also insist that ISPs use the term "average" when mentioning speeds, instead of the current "up to", and that part of the advert encourages customers to use speed checkers to ensure they're getting the service they subscribed to.

"There are a lot of factors that affect the broadband speed a customer is going to get in their own home from technology to geography, to how a household uses broadband," said Shahriar Coupal, director of the Committees of Advertising Practice.

"While we know these factors mean some people will get significantly slower speeds than others, when it comes to broadband ads, our new standards will give consumers a better understanding of the broadband speeds offered by different providers when deciding to switch providers."

The new rules will also govern the advertising of fibre services, which the ASA found was considered a "buzz-word" among customers for modern broadband rather than a term describing a specific service. Under the rules, ISPs will no longer be able to claim state-of-the-art technology if it's only part-fibre, and advertised speeds will also be subject to the new rules set out by CAP.

"Up until now, broadband has been the only utility you can buy without knowing precisely what it is you're going to get," said Dan Howdle, telecoms analyst for Cable.co.uk. "The speeds advertised are the expectation you set, no matter how you try to qualify them. Advertising speeds only a fraction of customers can receive helps no one it damages provider reputation and stokes fury among customers. Adding the words 'up to' was never going to cut it."

"Today's ruling means advertised speeds are going to come down to more closely match the expectations of the average customer by April/May next year," added Howdle. "Up until now the most common complaint from broadband customers concerns receiving less than what they thought they were going to get. This will go a long way to alleviating that most persistent of gripes."

The days of ISPs claiming broadband speeds that ordinary customers could never hope to achieve might finally be coming to an end, after the Committees of Advertising Practice (CAP) issued proposals to crack down on misleading claims.

CAP, the regulatory body that is responsible for advertising codes in the UK and part of the Advertising Standards Authority (ASA), has published a 10-week public consultation seeking views on different options on how to strengthen standards around broadband speed claims.

Each option would also require any company advertising their broadband speed claims to urge potential customers to check with the broadband provider the actual speed they're likely to receive.

CAP added that the options are "intended to better manage consumers' expectations of the broadband speed they're likely to receive from different broadband providers, with each of them offering tougher standards for broadband speed claims in ads than the current position".

Research commissioned by the ASA found that the current regulatory standards were likely to mislead consumers.

According to current standards, headline speed claims are allowed if they are achievable by at least 10% of customers, where they are preceded by the words "up to" and qualified, as appropriate, to help manage consumers' expectations of achievable speeds. The research said that speed is an important factor for a lot of people making decisions on which provider to choose.

However, broadband speeds differ on several factors and traditional advertising "cannot reasonably be expected to provide the same information as one-to-one information direct from each provider about the speed an individual consumer is likely to get."

But CAP said that research was unable to find consensus on an alternative advertising standard that would ensure consumers are not being misled, and therefore the consultation would now ask for views on the four options outlined above, as well as welcoming other options proposed by respondents.

"We take an evidenced-based approach to our work," said Shahriar Coupal, director of CAP. "Research commissioned by the ASA persuades us that tougher standards are needed to prevent consumers from being misled by advertised broadband speed claims."

He added that the CAP was "determined to ensure the information it provides, including about broadband speed, is trusted and welcomed by consumers".