Inside BT's Labs: The future of broadband

BT says it’s going to have “ultrafast” broadband in 12 million homes by 2020 — is that a pipe dream? 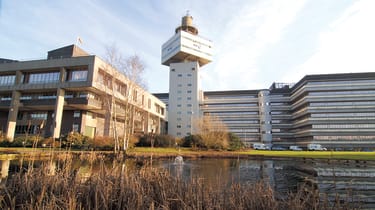 If you've ever driven down the A12 in Suffolk, you may have noticed a strange-looking building that looks something like an air-traffic control tower. Except it hasn't got BA's name plastered on it, but BT's.

Opened by the Queen in 1975, Adastral Park started life as the relocated Post Office Research Centre. Now its vast sprawl of oddly shaped industrial buildings and offices houses 3,000 BT engineers and staff, along with 84 other high-tech companies, all working to develop the telecommunications technologies of tomorrow.

I, along with a handful of other journalists, was recently invited to take a peek at what's being developed at this research melting pot. There we were shown technologies that are going to define home, business and wireless broadband connections for the next decade, as well as some startling inventions, such as the helium balloons that will help restore broadband connections in disaster zones.

Here's what BT's been working on behind the Lab doors.

The next big leap in broadband speeds for most Openreach customers will be based on a technology called G.fast (a name with such inexcusable punctuation that we wonder if will.i.am has picked up another tech consultancy).

G.fast will shove fibre-to-the-cabinet (FTTC) lines into the triple-figure speeds for the first time, delivering downstream connections of 100Mbits/sec and beyond. It does so by increasing the amount of spectrum used in the existing copper cabling. While the VDSL technology used for today's FTTC lines uses only 17MHz of spectrum, G.fast uses 106MHz.

G.fast is currently being rolled out using cabinet sidepods -- a mini-cabinet that is literally bolted to the side of existing cabinets. Oddly, these connect to the original telephone cabinets that have probably been sat in your street for decades, not the newer fibre cabinets that have been installed alongside them.

The pods can be bolted onto either side of the existing telephone cabinet, in case one side of the cabinet sits flush with a wall or another piece of "street furniture", as Openreach calls it. Inside those pods is a DSLAM (Digital Subscriber Line Access Multiplexer) that can support up to 96 customers. The DSLAM is connected to the fibre cabinet using a hybrid cable, which also draws power from the fibre cabinet.

BT has been developing this technology for some time, but only recently did the DSLAM reach the point where it could support almost 100 customers, the tipping point for a commercial rollout. "When we started this, state-of-the-art was around 16 ports, which obviously wasn't going to play too well if Openreach said 'we've enabled a cabinet, the first 16 people, you're in luck, beyond that, nah'," said Trevor Linney, head of access network research at BT.

"So we drove the industry. A lot of the work we did here at the [Adastral Park] labs proved you could build far bigger units. We presented that challenge to industry and initially that went from 'it can't be done' to... 'it can't be done today'. If you give us another 18 months, another iteration of Moore's Law, if we can cram more transistors onto those chips, we can do more."

BT believes G.fast has the potential to deliver speeds of up to 500Mbits/sec to most homes within a decade. However, the downside of using more spectrum is that the speeds fall of a cliff faster. You'll have to be within 400m of your cabinet to have any real hope of seeing a speed boost.

Which is where the next-generation G.fast DSLAMs come in. Instead of being bolted onto the side of cabinets, these sit on telegraph poles, in an environmentally-sealed unit. Not only are they much closer to the customer, but they double the amount of spectrum being used once more, delivering download speeds in excess of 1Gbit/sec and 300Mbits/sec on the upstream.

The problem with being stuck up a telegraph pole is that they're difficult to power, but here BT is working on a novel and somewhat cheeky solution. "We're experimenting with concept of reverse power," said Linney. "Can the customer power just their share of the network's electronics by plugging it into their home via a fat plug? That [DSLAM] device is actually being powered by a small amount of power being provided by the customer."

The G.fast sidepods are already being trialled in several locations around the country. G.fast currently requires its own modem, which is plugged into the ISP-supplied router, but eventually it will likely be built into BT Home Hubs and other ISPs' equipment. The faster telegraph pole technology is still waiting to be deployed.