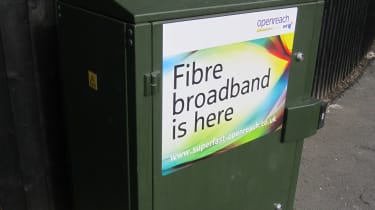 Millions of UK broadband customers are being misled by adverts claiming to offer 'full-fibre' services that in reality are dependent on outdated copper cables, new research has warned.

The Advertising Standards Authority (ASA) has been criticised as "backward-looking" for failing to regulate the use of term 'fibre', which has yet to have a clear definition in advertising and has led to many customers incorrectly thinking they have the best services available.

This has resulted in "years of misleading advertising of broadband speeds" that have left customers confused as to what they're paying for, according to network provider CityFibre, which commissioned the research.

Of the 3,400 broadband customers it surveyed, 65% believed that they had already upgraded to a fibre connection that was no longer reliant on slower copper cables, even though this is still the most common connection type in the UK.

A quarter (24%) of customers believed they purchased services that used fibre cables running to their front door (FTTP), despite only 3% of the UK population enjoying such connections, and just under half thought that services advertised as 'fibre' delivered internet in this way as standard.

CityFibre said in March that it plans to take the ASA to court to dispute its conclusion that 'fibre' is not a misleading term in advertising, even when the term is used to describe hybrid copper-fibre connections that are far slower than FTTP networks.

The vendor argues that BT Openreach and Virgin Media, the UK's largest providers of fibre infrastructure, have for years falsely advertised connections reliant on copper cables as fibre, something which it claims is now an industry norm.

"Years of misleading advertising of broadband speeds and technologies have left people totally confused about what they are paying for, undermining trust in the industry," said Greg Mesch, CEO of CityFibre. "It is time to put the customer at the heart of the full fibre rollout and ditch dishonest descriptions once and for all.

"We are calling on all broadband providers to stop using the word 'fibre' unless it is describing a full fibre connection. Rather than waiting for the backward-looking ASA to be forced to act, the industry should stand as one and pave the way for a new generation of connected homes, businesses, towns and cities across the UK."

CityFibre said it has today written to the CEOs of major broadband providers BT, Virgin Media, TalkTalk, Sky, Vodafone, EE and the Post Office in an effort to get them to change the way services are advertised and instigate change ahead of any decisions made by the ASA.

IT Pro has contacted these providers for comment on today's report. A spokesperson for the Post Office told IT Pro that it had received an email from CityFibre on Friday, and that it was "currently reviewing their findings and will be responding in due course".

The ASA has only just reformed the rules around broadband advertising, following complaints that internet service providers were misleading customers about the speeds they would realistically receive. In November last year, it was ruled that ISPs could only advertise their fastest available speeds if they were accessible to at least 50% of their customer base, up from 10%.