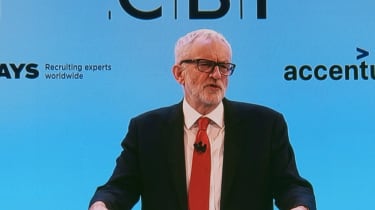 Proposals to bring BT's Openreach divison under public ownership to provide universal full-fibre coverage is evidence the Labour Party has succumbed to political extremism, the Confederation of British Industry (CBI) has claimed.

Extremist tendencies have taken over both sides of the ideological divide, according to CBI director general Caroline Fairbairn, with businesses yearning for a return to the "evidence-based" politics of the recent past.

she argued that on the party's right, extremism has manifested as a preference for a no-deal Brexit, while on the left, it's come in the form of the widest programme for nationalisation the country has seen in recent years, typified by its broadband plans.

"I believe we're facing a danger that could get in the way of a bright future, and it takes the form of extreme ideology," Fairbairn said at the CBI's annual conference, adding this is present on both sides, and is causing harm to the economy.

"The Labour party is proposing the biggest programme of renationalisation this country has ever seen, at great cost, with uncertain returns to the taxpayer, and with no clear route to better customer service.

"And the most recent proposed nationalisation of part of BT really was a bolt from the blue, and it sent a chill through boardrooms at home and abroad, with firms questioning whether their investment is safe, and some thinking 'are we next?'"

Labour's plans involve mandating Openreach to lay full-fibre cables in rural areas first, then towns and cities, by 2030. This will be facilitated through the takeover of the BT division; paid for by swapping shares for government bonds.

The broadband will then be provided to homes and businesses free of charge through a public broadband provider. The maintenance costs of running the full-fibre infrastructure, valued by the party at £230 million per year, will be paid for by raising a tax on large corporations including large tech firms.

The issue was further raised by BBC Newsnight journalist Kirsty Wark, in an on-stage conversation with Fairbairn, suggesting that the status quo has led to the UK's infrastructure lagging behind its neighbours.

The broadband landscape is far from the standard set by countries in Europe, let alone the likes of Japan and South Korea, both in terms of coverage and average speeds.

Just 8% of offices and homes in the UK have access to super-fast broadband, with Openreach and Virgin holding a duopoly over full-fibre installation. South Korea, by way of comparison, boasts 95% coverage.

"No-one is saying that there isn't a challenge in building broadband but there are plans in place with private money coming into broadband at the moment that currently has been put on hold. And there is absolutely a case for public sector support with the last 10%," Fairbairn added, when pushed.

"I think there is an important conversation to be had about the public-private partnerships that we put together on this.

"I think it's the kind of thing where there is absolutely a role for the government here, but not for the whole taking over of private sector enterprise that is prepared to do the job."

Boris Johnson first proposed universal super-fast broadband coverage by 2025 when he became prime minister, but rowed back on this pledge after a sea of voices branded this unrealistic.

The current Conservative Party plans are now based on rolling out gigabit broadband across the country by 2025. The prime minister previously branded the Labour policy as "crackpot".