The 2014 World Cup ended with Germany winning its 4th title after one of the most thrilling sporting tournaments ever.

Not only did the competition captivate billions around the globe, but it's been a showcase for predictive analytics.

Google and Microsoft were on hand to fill the void left by the Nostradamus-like Paul the Octopus (RIP), which shot to fame during the 2010 World Cup for his correct predictions.

Both Google and Microsoft correctly foresaw that Germany would beat Argentina in the final.

Impressively, Microsoft edged the soothsaying competition by making 15 out of 16 correct predictions in the knockout stages compared to Google's 14 out of 16.

So how did they do it?

The web giant used multiple seasons' worth of statistics from sports data company Opta as a starting point.

"We combined this modeling with a power ranking of relative team strength developed by one of our engineers, as well as a metric to stand in for home-team advantage based on fan enthusiasm and the number of fans who had traveled to Brazil," Benjamin Bechtolsheim, product marketing manager of the Google Cloud Platform explained in a blog post.

The firm gathered all the relevant data using Google Cloud Dataflow and then used Google BigQuery to analyse it.

Google got two predictions incorrect. The firm tipped France to knockout Germany in the quarter-finals and also thought Brazil would regroup to beat Holland in third-place play-off.

However, when it came to the most important game of the tournament, Google provided an eerily accurate prediction.

"Drumroll please Though we think it's going to be close, Germany has the edge: our model gives them a 55 percent chance of defeating Argentina," Bechtolsheim noted two days before the final.

Meanwhile, Microsoft was coming off the back of successfully predicting the outcomes of reality TV shows like American Idol with its Bing Predicts tool. Microsoft recognised that it would have to adapt its algorithms to make the predictive tool suitable for the World Cup.

"The process of predicting outcomes of sporting events is unlike voting show predictions, as popularity and some sentiment signals do not play similar roles in determining who wins a contest," it explained in a Next at Microsoft blog post.

"Rather, the actions and performances of a handful of individuals solely determine who wins, loses, or ties."

Microsoft appeared to get the edge over Google by pulling in data from a wider pool. The firm took into account:

- The win/loss/tie record during qualification matches and other international competitions, along with the margin of victory.

- Microsoft also used data from betting firms to leverage the wisdom of the crowds'.

Microsoft's system predicted that Brazil would beat Holland in the third-place play-off, much like Google.

When asked about the result of the final, the firm's Cortana voice assistant delivered three specific answers all backing Germany - although not quite as comprehensively as Google: 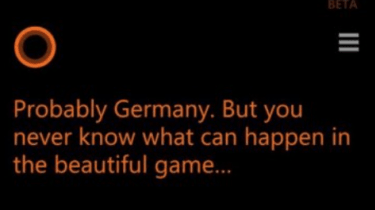 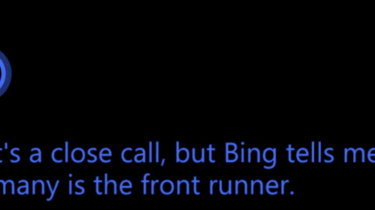 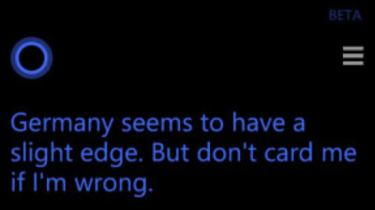 The firms stopped short of predicting the exact scorelines during matches, which would have been an astonishing feat. Shock results were never too far away in Brazil. Holland dismantled the reigning champions Spain 5-1 in the opening weekend and Germany demolished Brazil 7-1 in the semi-final.

However, by the time Russia 2018 arrives, it wouldn't be surprising to see the firms take on the challenge of predicting the score.