SAP teams with Nvidia to bring AI capabilities to its customers 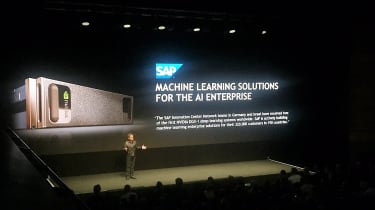 "SAP and ourselves are working together to make the world's largest enterprise software companies and integrate it with Nvidia to bring hundreds of customers of SAP the benefit of AI computing," Nvidia CEO Jen-Hsun Huang  said on stage at the company's GTC Europe conference in Amsterdam today.

He added that the deal sees SAP now using DGX-1 AI supercomputers at its operations in Potsdam, Germany, and in Israel, where teams are building machine learning tools for enterprises.

"Now with the partnership of SAP we will soon have applications running on these servers to serve the world's largest enterprises," he added.

Over the last two months, DGX-1 has been adopted by artificial intelligence labs around the world, including labs based at UC Berkeley, Stanford University, and OpenAI.

DGX-1 is the world's first purpose-built system for deep learning with fully integrated hardware and software that can be "deployed quickly and easily".

As part of the same keynote, Huang also announced two of Europe's top AI research centres will collaborate with Nvidia to ramp up their efforts in the fast-growing field.

"This will advance important research to move it along and of course we have all kinds of opportunities to collaborate and move society along in a good way," Huang explained.