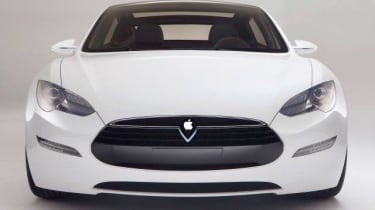 The organisation investigated Zhang's activities after he resigned and told his employer he was planning to join the startup, leaving his role in Apple's Project Titan division.

He apparently acted suspiciously when handing his notice in and so his manager decided to look into Zhang's activity. The company's New Product Security Team noticed Zhang's network activity was unusual and so seized his devices, analysing how they had been used.

Just before Zhang resigned, Apple discovered activity on his devices has increased substantially compared to previous years at the firm and he had been accessing data about the company's prototypes and prototype requirements, the FBI said.

"The majority of his activity consisted of both bulk searches and targeted downloading copious pages of information from various confidential database applications," the documents filed with the Northern District Court of California read. "The information contained within the downloading contained trade secret intellectual property, based on the level of Zhang's access within Apple's autonomous vehicle team."

Zhang also visited the Apple Campus on an evening in April, at which point data was downloaded from Apple systems and he also left with a box of hardware from the premises, the filing said. The data was downloaded onto Zhang's wife's computer in an alleged attempt to avoid being discovered, before he tried to leave the country on 7 July, when he was arrested.

"Apple takes confidentiality and the protection of our intellectual property very seriously," Apple said in a statement. "We're working with authorities on this matter and will do everything possible to make sure this individual and any other individuals involved are held accountable for their actions."

Zhang faces a punishment of up to 10 years in prison and up to a $250,000 fine if found guilty of stealing the company's secrets.

Apple confirmed that it is working on a self-driving car system in a letter to US transport regulators, the National Highway Traffic Safety Administration (NHTSA).

The letter, signed by Apple's director of product integrity, Steve Kenner, said: "The company is investing heavily in the study of machine learning and automation, and is excited about the potential of automated systems in many areas, including transportation".

In the letter, Apple asked the NHTSA not to introduce unnecessary restrictions relative to road testing. It also suggested that companies working on self-driving vehicles' share data related to their products' performance (e.g. crashes, successes, issues), in order to help each other perfect their respective vehicles.

A month ago, sources had told Bloomberg that Apple might never launch a self-driving car.

The sources in question said that staff members working on the Apple car had been reassigned, and executives had been given fewer resources to work on the project.

The five-page letter to the NHTSA appears to contradict these reports, with Apple openly expressing its interest in automated vehicles.

The company did not offer further details about the Apple car, but said: "Apple looks forward to collaborating with NHTSA and other stakeholders so that the significant societal benefits of automated vehicles can be realised safely, responsibly, and expeditiously".

The much-rumoured Apple car may now never be launched, according to reports.

Apple had been working on a project termed Project Titan', that aimed to produce a smart car that could compete with those from Google, Tesla and other companies worldwide. The car's release to the public was expected to be around 2019.

Bob Mansfield, the same engineer that worked on the Apple Watch and MacBook Air, led the project that now appears to have been halted.

Sources told Bloomberg that hundreds of the staff members working on the Apple car are being reassigned to other project or being dismissed.

The same sources told Bloomberg that Apple's executives have been given fewer resources to work on the project until the end of the year. By then, the company should decide whether the project is still feasible or if it will be definitely spiked.

It now appears that Apple will not be designing and building its own car, as reports last month suggested it had also begun discussions with car manufacturers such as Lit Motors and McLaren.

German newspaper Handelsblatt also found that BMW and Daimler declined Apple's offer of working on their car due to an issue over the control of private data stored in iCloud.

This would confirm the opinion that Tesla CEO Elon Musk shared with the German newspaper Handelsblatt last year when he said: "It's good that Apple is moving and investing in this direction, but cars are very complex compared to phones or smartwatches. You can't just go to a supplier like Foxconn and say: build me a car."