What is application software?

We look at the characteristics that define applications, from stand-alone software to full-blown suites 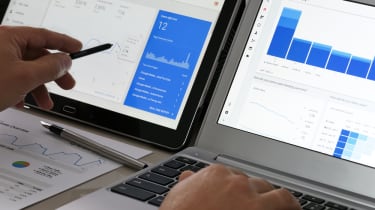 Application software has really proliferated since cross-platform software has become more popular. Some of the programs used by individuals and businesses across the globe need to be taken everywhere to be used at any time and the evolution of traditional software into apps has enabled users to work effectively wherever they're needed.

Application software is designed to be less stressful on a CPU compared to traditional software, which demands more resources and usually features a simple user interface (UI). It also moves away from the traditional on-system installation method of using software; it allows web-based applications to come to the fore, which put even less strain on a system's resources, letting modern high-speed internet and cloud computing bear the load.

Put simply, application software is any program or group of programs designed to be used by the computer's operator. It differs from other software that might come pre-bundled with a computer's operating system, such as a utility. An example of this would be disk tools, software included on operating systems that can scan a hard drive for problems, remove unnecessary files and defragment a drive. These can be used by the end-user, but rely on the computer's core to operate, whereas apps do not run independently and don't rely on information from the system's core.

Desktop applications are 'installed' on a user's computer. They are normally pretty high-powered software that use the computer's memory directly to carry out an action. Other characteristics include that they allow people to manipulate datasets, graphics or numbers to create an output. Examples of desktop applications include word processors, music players and video players.

While most application software can be installed directly to a machine, many allow users to access tools through web browsers and some only exist in web format. Not only do these services free up space on a user's hard drive or network, being web-based means they can be accessed from anywhere in the world at any time, with data being stored in the cloud. This also means the application is kept up-to-date automatically, without the risk of a user running an insecure version.

This has given rise to software-as-a-service (SaaS), in which users agree to a subscription in exchange for application services, often provided through a web browser. Salesforce, Oracle, and Adobe Creative Cloud are some of the most widely used SaaS application suites.

Application packages often are themed around a certain part of your business. For example, Adobe's Creative Suite comprises multiple creative applications designed for editing photos, videos, creating websites and more. An enterprise may want a fully-integrated set of applications to cover their entire business operations and so may comprise HR applications and customer relationship management (CRM) and more to keep data and performance in check.

Other app suites are extendable. A computer anti-virus software, for example, may include the basics, but users are able to tag on extra services that protect their PCs against other threats, not included in the basic package. In such cases, the number of people using the software can dictate what's included too, such as password management for personal subscriptions, or protections for file servers on business accounts.

One of the most useful benefits of application software is that it is relatively simple to replace and update, in a process known as application modernisation. Otherwise, like the legacy programs they were deployed to replace, they become outdated.

Typically, applications are modernised through the rewriting of existing code, or through making the application more web-friendly by fitting it with a new interface. The ease at which applications can be rewritten varies with each project, however. For example, some segments may be hardcoded. As with any type of business transformation, the modernisation journey cannot begin without planning. The application portfolio must be understood, and an approach to modernising each application identified.