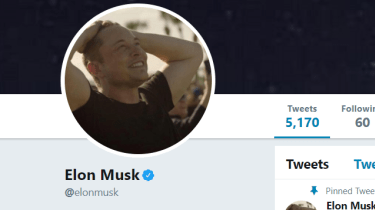 When the world heard that twelve young boys from the Wild Boars football team had been successfully rescued from their 18-day ordeal inside the monsoon flooded Tham Luang cave in Thailand, there was a collective sigh of relief. We celebrated the brave team of rescue divers on a job well done and looked forward to the group's full recovery.

The whole world, except Elon Musk it seemed, the increasingly embittered billionaire who decided to call one of the divers a "pedo" on Twitter instead. The horrific post was aimed at British diver Vern Unsworth and was arguably the lowest point of a week filled with middle-aged rich men being unbelievably rude. 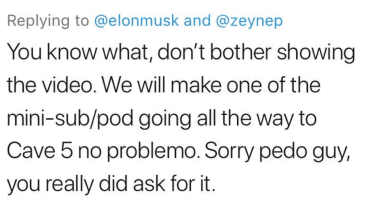 It hands down beats Donald Trump blocking the Queen's path during his visit to the UK. The only way he could have 'Trumped' the Tesla CEO is if he'd stuck a leg out and tripped her majesty up in front of the Guard of Honour, but that would have broken the internet beyond repair.

Musk's tweet, however, is without excuse and another example of the Tesla CEO's abrasive public persona negatively impacting on his business. Since the remark, Tesla's share prices have dropped, knocking $2 billion off its market value.

He may be an extremely intelligent entrepreneur and highly regarded figure in the tech world, but Musk has proven to be a rogue tweeter in desperate need of filtering. He tweets first and thinks later.

Previous tweets about his electric car company, Tesla, being worth a trillion dollars in a decade look a little crazy as it continues to struggle with production targets. Indeed, the only machine Musk needs to concern himself with right now is a PR one.

A good PR would have prevented Musk tweeting such a derogatory term, particularly towards someone like Unsworth, who was an integral part of the cave rescue mission. You would think a 47-year-old billionaire tech boss would be a bit more grown up. But then, that would suggest you don't know much about him.

This isn't a one-off misdemeanour either. Musk has been struggling with his PR image for a while now. Last year, during a Tesla earnings call, he shocked investors with dismissive and rude response to questions from journalists. He called them "dry" and said that "bonehead questions are not cool". He rounded it off by claiming the CEO of Daimler didn't know anything about physics and said that he had no interest in satisfying the desires of day traders. Predictably, the Tesla shares dropped immediately.

He's very opinionated and often outspoken on a number of complicated topics, such as living on Mars, flying cars and the dangers of AI, but it's often his knee-jerk reactions on social media that land him in hot water. His latest outburst couldn't have come at a worse time - when the world was celebrating a successful rescue, the last thing they wanted was the misguided opinions of Elon Musk.

He could easily hand his twitter over to someone less likely to tweet whatever comes to mind, or, as the technology is available, he could create a chatbot to tweet for him. But then again, if it's too Musk-like it might start tweeting out of control - and we know how much he fears rampant AI.

Those fears also fueled a war of words with Facebook's nerd king, Mark Zuckerberg who called Musk's ideas on the subject as "pretty irresponsible" and labelled him a "naysayer". Musk came back with a zinger on twitter the next day: "I've talked to Mark about this. His understanding of the subject is limited." Burn.

I've talked to Mark about this. His understanding of the subject is limited.

Last week he took on the media for labelling him a billionaire arguing it "devalued" him. Despite that being fact, he gave the alarmingly dumb observation: "they didn't call me that until my company got to a certain size". Was it a billion dollar size, by any chance?

Ironically, the “billionaire” label, when used by media, is almost always meant to devalue & denigrate the subject. I wasn’t called that until my companies got to a certain size, but reality is that I still do the same science & engineering as before. Just the scale has changed.

Even his attempts at light-hearted humor come off a bit strange; during a difficult period for his Tesla factories, where Model 3 targets had been missed and an investigation into poor working condition loomed, Musk tweeted an April fools joke about bankruptcy, but the tweet was posted well after the noon cut off for April fools high jinks.

This latest outburst may have been one tweet too far as Unsworth is said to be considering legal action over the comments. Musk has apologised saying he had "spoken in anger". Perhaps it's time he handed over his account to a PR official to knock out a sincere "sorry" before he further damages his reputation.