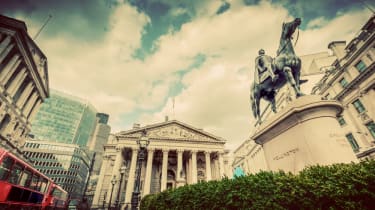 The Bank of England is overspending because it's using legacy infrastructure and relies on manual processes rather than automation, a report by the government's Public Accounts Committee (PAC) has revealed.

The organisation apparently spends 33.6% more on IT compared to other departments in the public sector, because it has failed to update its systems and processes.

Because the Bank of England is responsible for processing such an enormous value of transactions (600 billion a day), it cannot afford an outage and so is sticking to older technologies, such as the 23-year-old platform known as the real-time gross settlement (RTGS) system, rather than exploring the potential of new automated operations.

This was supported by the PAC's report, which revealed that although the Bank of England's expenditure was much higher than other departments, its availability was also much higher, only experiencing outages 0.01% of the time, compared to the government's 0.37% average.

Another area that has been highlighted as inefficient is the Bank's working practices and diversity of job roles. The report highlighted that it has not explored the potential of hot desking, for example, which could be preventing modernisation.

"The Bank's ICT systems are expensive and need updating, its procurement systems are not fit for purpose, there are too many job titles creating complexity and cost, and the estate is too large for its needs," the committee said.

Although the Bank of England is now in the process of replacing the antiquated RTGS system used to process payments, it's not planned to come into effect until 2025, by which point the migration would have cost upwards of 150 million.

The PAC has now requested that the Bank of England reports back in June with a clear strategy for digital transformation and modernisation in both its IT and HR practices.