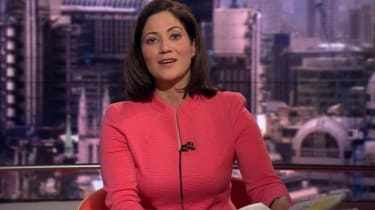 Mishal Husain, who was standing in for Marr, was forced to move studios at the last minute with problems continuing to affect the station's scheduled programming.

The BBC News followed Marr's show, but anchor Chris Mason had to stop reading news headlines after two minutes due to "gremlins".

"I'm afraid, Mishal, I'm not seeing any more of this news bulletin," he said. "These gremlins, I'm afraid, are continuing and I'll have to hand back to you."

Earlier, Husain informed viewers: "We do have a few technical problems this morning, so apologies for that. We have come on air on BBC One a little bit later than we had hoped."

There was an interview scheduled with actor Lesley Manville that didn't feature on the Marr show, due to the delays.

The editor of the BBC's live political programmes, Rob Burley, tweeted: "There's no mysterious story: the team have had to move studios due to a technical failure. That's why the show was on later and why the background is different. The presenter was always Mishal as Andrew is away. Apologies for the glitches and late start."

There’s no mysterious story: the team have had to move studios due to a technical failure. That’s why the show was on later and why the background is different. The presenter was always Mishal as Andrew is away. Apologies for the glitches and late start. #marr https://t.co/lgbUeUhtZM

What the "technical failure" was is still a mystery as the BBC haven't divulged further details. In October The BBC was forced to switch from live broadcasts to recorded material on its TV news channels after suffering a technical glitch from an IT migration.

The glitch resulted in presenter Fiona Bruce being escorted through rush hour traffic in a police car to make it to the Millbank Studios instead of the facilities at New Broadcasting House.

Going back to 2017, the BBC's flagship news programme suffered comical technical faults during a live broadcast as automated cameras disrupted a segway between presenter Simon McCoy and weatherman Matt Taylor.

The situation serves as a cautionary tale to regularly check critical IT systems and infrastructure and ensure that there is a backup strategy or several layers of redundancy to prevent IT glitches from disrupting or severing the services you or your business offers.