Google staff "sick of retaliation" from HR over abuse complaints 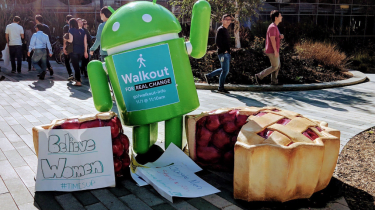 Google staff will hold a 'sit-in' on Wednesday to protest alleged retaliation against the workers that organised the walked out over sexual harassment, six months ago.

Despite Google's attempts to appease this situation and come out in support of its workforce, there are a number of stories surfacing that suggest staff that have reported harassment or inappropriate conduct from a senior employee have received a backlash.

With each story, there is also a consistent narrative of a HR department either failing to deal with the complaints appropriately or just not dealing with them at all. Now, on the sixth-month anniversary of the original walkout, Google staff are to do the opposite and 'sit-in' to protest. The action was announced on Twitter by 'Google Walkout For Real Change' and will take place at 11 am EST.

"From being told to go on sick leave when you're not sick, to having your reports taken away, we're sick of retaliation," the group tweeted. "Six months ago, we walked out. This time, we're sitting in. 11 am tomorrow. #NotOkGoogle #GoogleWalkout."

From being told to go on sick leave when you're not sick, to having your reports taken away, we're sick of retaliation. Six months ago, we walked out. This time, we're sitting in. 11am tomorrow. #NotOkGoogle #GoogleWalkout pic.twitter.com/GCq0x1O8cZ

In November, following news reports that Google protected employees found guilty of sexual misconduct, such as Android creator Andy Rubin, who received a multi-million dollar severance package despite being found guilty, more than 200 of the company's engineers walked out in protest.

Six months later, despite the worldwide coverage of the strike and Google changing various internal policies for reporting harassment and misconduct a number of its workforce are dowing tools again.

In the run-up to the sit-in, Google Walkout For Real Change posted four accounts of retaliation against unnamed Google employees. A crucial detail in each of the stories is that these incidents were not properly dealt with by HR, and in some cases, the issue was even escalated. The victim in the first story went as far as to say: "HR are leveraging personal vulnerabilities of Googlers to quash concerns, protect abusers and retaliate against those who speak out."

One account says that they reported a manager for "repeatedly saying inappropriate things about a mother who worked under them". Instead of dealing with the issue confidentially, HR shared the employee's concerns directly with their manager, who retaliated by immediately interviewing for a replacement.

Story 2: "When my manager started repeatedly saying inappropriate things about a mother who reported to me (.e.g she’s probably trying to get pregnant again and is super emotional and hard to work with then pregnant) I reported the behavior to HR. ...

In another story, an employee reported her "tech lead" to their manager for sexual harassment, but the manager suggested they were "overreacting". The employee then reported the manager, as they no longer felt comfortable working with them while no action was being taken.

Story 3: "I reported my tech lead to my manager for sexual harassment, but my manager thought I was “overreacting.” I then reported my manager, as I could no longer feel comfortable working with this colleague every day while no action was being taken. ...

"The tech lead provided unsolicited feedback in my performance that took four months for the performance team to remove. The manager boxed me out and denied my promotion nomination by my peers.

"Eventually, HR found there was retaliation but simply offered "coaching" to the tech lead and manager. I was asked to accept this. I refused. No additional actions were taken. They both still work at Google."

Things are changing at Google, on Wednesday both former CEO Eric Schmidt and former Google Cloud CEO Diane Green have announced their departures from the company's board. And, the company has announced a set of changes to help employees report harassment or discrimination allegations. But first, it would seem it must fully investigate its previous methods which have allegedly allowed harassment and abuse to flourish.

"We prohibit retaliation in the workplace and publicly share our very clear policy," a Google Spokesperson said. "To make sure that no complaint raised goes unheard at Google, we give employees multiple channels to report concerns, including anonymously, and investigate all allegations of retaliation."