Despite the US trade ban, the Chinese firm's laptop has been re-listed in the Microsoft store 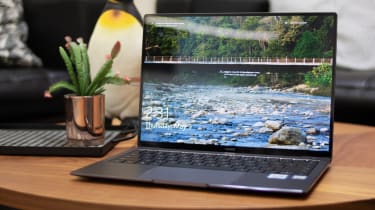 Microsoft has appeared to reverse its stance on the US ban on Huawei by re-listing the Chinese firms MateBook laptop range in its online store. However, the American tech giant has said it's simply clearing out stock.

Earlier this year, Huawei was placed on a trade blacklist by the US government, banning companies from supplying the Chinese telecoms giant with technology hardware and software.

Huawei's Matebook line of laptops vanished from the Microsoft online store without explanation in late May, shortly after the blacklist was announced. However, in mid-June, the Matebook range returned to the virtual shelves.

"We have been evaluating and will continue to respond to, the many business, technical and regulatory complexities stemming from the recent addition of Huawei to the U.S. Department of Commerce's Export Administration Regulations Entity List. As a result, we are resuming the sale of existing inventory of Huawei devices at Microsoft Store," a Microsoft spokesperson said in a public statement.

While Microsoft maintained that it's just selling off remaining stock, its been reported that a number of US-based companies, including chipmakers Intel and Qualcomm, have met with the US Commerce Department due to fears about the ramifications of the Huawei ban on their own revenues.

According to anonymous speakers quoted in Reuters, these companies have been quietly lobbying the US government to rethink the parameters of the ban. The same is reported on the software side, where Google allegedly tried to make a case to the US government that it needs to be able to provide technology to Huawei for national security.

The main gist of the argument is that Huawei would be forced to fork Android into a 'hybrid' version which could present more of a security risk, according to The Finacial Times.

Unfortunately for Huawei, the ban is still in place and the company's founder and CEO Ren Zhengfei said on Monday that its revenue forecast for the next two years has fallen by $25 billion, likening the company to a badly damaged plane.

Ren said at a press conference at the company's headquarters that the firm's revenues will be around $100 billion for the next two years which is down $5 billion from its 2018 earnings and significantly lower than the original $125 billion forecasts for 2019.

Huawei is also preparing for a 40-60% reduction in international smartphone shipments, the first quantifiable indicator of the ban's effect on its phones, as Huawei attempts to re-market itself with shifting goals for domestic dominance, according to Bloomberg.