CEO Antonio Neri goes all in with consumption-based business model 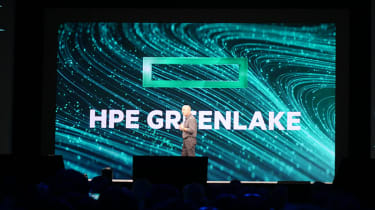 There was a time, not that long ago, when "as a service" was a dirty word (or phrase) among traditional IT vendors. It seems now, however, that Hewlett Packard Enterprise (HPE) can't get enough of it. Indeed, CEO Antonio Neri has declared that by 2022 HPE will be "a consumption-driven company" with its entire portfolio offered as a service.

"In the near future, we believe everything will be delivered as a service," said Neri during his keynote presentation. "More and more of you tell me that you don't want to spend resources managing your infrastructure, whether on the edge, in the cloud or in the data centre. You just want a place for your application data and your business applications. You want to be the service provider, growing your enterprise and HPE wants to help you deliver that experience."

Indeed, attendees at this year's Discover conference in Las Vegas can barely move for mention of GreenLake, the company's pay-per-use scheme that was announced all the way back in November 2017.

According to Neri, it's HPE's fastest growing business, with 600 customers, a 99% renewal rate and contributing more than $2.8 billion in total contract value.

Following, or perhaps driving, this trend, the company is making a hard pivot towards encouraging customers to move towards "as a service" model and persuading partners to sell it.

According to several sources, this latter portion has been rather difficult, which is perhaps why GreenLake has been lying low for the past 18 months.

Amid all the lauding of GreenLake at the conference PointNext, HPE's service business, was notable by its absence. Almost two whole days passed without it being mentioned and even in the keynote its name only passed executives' lips a smattering of times.

In a move to a consumption-based business model, this seemed rather a strange oversight. Could it be, as IT Pro sources suggested, that GreenLake is, in fact, PointNext in disguise?

Well, not quite according to Flynn Maloy, VP of marketing for PointNext.

"We deliver it, we sell it, so the services organisation is really where GreenLake comes from. But when we sell a GreenLake deal I actually the majority of the revenue is the servers and the storage, which means it's the hardware that's the majority of the revenue. So when you think of GreenLake, you should think that PointNext is just one of the components you get in the deal."

"But if you're going to consume something, you know, it's the services team that's actually delivering it to you," he concludes.

Consumption-driven, but not consumption only

It would be something of a surprise if a big beast like HPE had really abandoned their traditional business model of selling boxes on a perpetual basis. After all, it's survived the explosion of cloud despite predictions some six or seven years ago that legacy vendors were about to go the way of the dodo.

So, while the GreenLake branding has been everywhere and "as a service" is very much the mantra of this conference (along with cloud-to-edge), customers can very much still go off and buy HPE hardware in a traditional way.

Scott Sinclair, senior analyst with ESG, tells IT Pro that this dual-pronged approach makes sense not just from the point of view of HPE but also its customers.

"Things like GreenLake are incredibly compelling," he says. "We've been talking about simplicity forever - it's almost a clich. But this conversation has changed. Before what we talked about was a box, but now simplicity needs to be looked at from an overall IT perspective, including data centre and hybrid cloud. [The GreenLake 2022 promise] means that if I commit to transforming my finance team to be able to accept these subscription models, I can get everything that way."

"But we know there's a decent percentage of organisations where their internal finance team are not set up to consume on premises structure as a service," he explains.

While those finance teams undergo this kind of transformation, or until Neri manages to capture their "hearts and minds" and persuade them it's a good idea, the continuation of traditional selling is both necessary and inevitable.