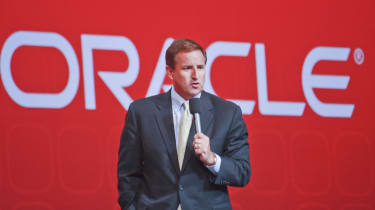 Oracle's chief executive Mark Hurd is stepping down from the company on a temporary basis for health-related reasons, as the software giant released its quarterly earnings earlier than expected.

The co-CEO, who shares his role with fellow chief executive Safra Catz, requested a leave of absence to address health-related issues, the company announced yesterday, following nine years at the company.

The news was announced in conjunction with the latest financial results, and has been disclosed just a few days before the company's annual OpenWorld conference is set to kick off in San Francisco next week.

"To all my friends and colleagues at Oracle, though we all worked hard together to close the first quarter, I've decided that I need to spend time focused on my health. At my request, the Board of Directors has granted me a medical leave of absence," said Hurd.

"As you all know, Larry, Safra and I have worked together as a strong team, and I have great confidence that they and the entire executive management team will do a terrific job executing the exciting plans we will showcase at the upcoming OpenWorld."

"Autonomy is the defining attribute of a Generation 2 Cloud," said Oracle's CTO Larry Ellison. "Next week at our OpenWorld conference, we will announce more Autonomous Cloud Services to complement the Oracle Autonomous Database."

As for the company's leadership, Catz will continue on as sole CEO, while Ellison, who co-founded the company, will handle Hurd's responsibilities. The company hasn't announced how long Hurd will be away from his post.