Democratic lawmakers push for breakup of US tech giants 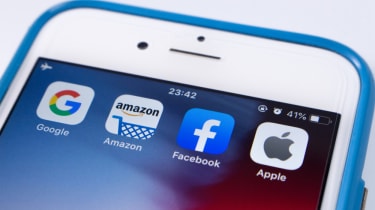 A congressional report has called for regulatory changes that could lead to the breakup of some of the biggest technology companies in the US.

The report, which is backed by Democratic lawmakers, follows a 16-month investigation into Google, Facebook, Apple and Amazon. This saw the CEOs of each company give testimony in person and over video conferencing software.

Each company has been criticised for anti-competitive practices such as buying-up competitors, preferencing their own services and monopolising markets. The report suggests that these tech giants have "too much power, and that power must be reined in".

Calls to breakup firms like Facebook and Google have come from a number of government officials, industry experts and even people that have helped to build or work for the four companies.

This has been a particular problem for Facebook, which owns both Instagram and WhatsApp. The company's CEO and founder Mark Zuckerberg has had to repeatedly defend himself from former employees suggesting its operation should be dismantled.

The report, however, agreed, stating that Facebook had "monopoly power" within social networking which it maintained with its data advantage to "acquire, copy or kill" new threats. As an example, the report highlighted an exchange between Zuckerberg and his chief financial officer regarding the $1 billion Instagram acquisition.

"One way of looking at this is that what we're really buying is time," Zuckerberg said, according to the report. "Even if some new competitors springs up, buying Instagram now... will give us a year or more to integrate their dynamics before anyone can get close to their scale again."

In a statement, Facebook said it competes vigorously with "a wide variety of services".

Google has been accused of monopolising online search and advertising using a series of "anti-competitive tactics", such as pushing its own content above other websites. For example, the report suggests Google used its search product to find out which browsers were the most popular, "and that informed their strategy for Chrome."  These segments of its businesses have also led to multiple antitrust cases in Europe.

The company said in a statement that it disagreed with the report, which it claims features "outdated and inaccurate allegations from commercial rivals about Search and other services."

Amazon possesses a "significant and durable market power" for online shopping, the report said, which was amplified in part by its "anticompetitive conduct in its treatment of third-party sellers".

The company's cloud division, Amazon Web Services (AWS) was also heavily cited in the report as a dominant force within the cloud market that "risks harming businesses and the broader public".

In a blog post, Amazon said "misguided interventions in the free market would kill off independent retailers and punish consumers".

"Large companies are not dominant by definition, and the presumption that success can only be the result of anti-competitive behavior is simply wrong," it continued. "And yet, despite overwhelming evidence to the contrary, those fallacies are at the core of regulatory spit-balling on antitrust."

Apple was also accused of "exerting monopoly power" via its App Store. The company, the report said, "creates and enforces barriers to competition and discriminates and excludes rivals while preferencing its own offerings".

Apple said in a statement it disagreed "vehemently" with the report. "Competition drives innovation, and innovation has always defined us at Apple," the company said. "We work tirelessly to deliver the best products to our customers, with safety and privacy at their core, and we will continue to do so."

While the report could have massive ramifications for the tech industry, not everyone agreed with the proposals. The Republican reaction was mixed and congressman Jim Jordan dismissed the report as "partisan" and said it advanced "radical proposals that would refashion antitrust law in the vision of the far left."