The leaked app could bring multimonitor setups into virtual reality 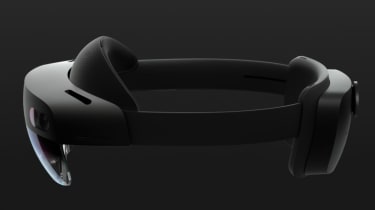 There’s an ongoing debate as to whether multiple computer screens make people more or less productive. What if there was a way to expand your screen workspace without investing in additional monitors? That seems to be the problem Microsoft’s leaked HoloLens app seeks to solve.

Codenamed “Mirage,” the rumored app reportedly simulates multiple virtual screens and would work with Microsoft’s HoloLens 2. The app would allow users to employ a virtual multimonitor setup using the HoloLens headset and would also let them adjust their screen layouts and add virtual monitors as they see fit.

First spotted by known Microsoft leaker and Twitter user WalkingCat, the HoloScreens app would eliminate the need for costly multi-monitor setups. Fortunately, WalkingCat was able to provide screenshots of the mysterious new app, sharing with followers what the setup may look like. WalkingCat also shared that it appears to require two apps to work - one for the desktop and one for the HoloLens headset.

While this leaked app would mean no more costly multi-monitor setups, it’s interesting to see Microsoft building a HoloLens app. The HoloLens offers a smaller field of view compared to other virtual reality headsets, which may make viewing multiple screens at once a tedious task.

Technology is keeping the economy's lights on

Regardless, this leak comes at an opportune time, as many users are focused on boosting productivity while working from home.

Though Microsoft has yet to respond to the leak or the potential app, it shows the tech giant is focused on developing a truly virtual desktop. For now, one can only guess when Microsoft may release it