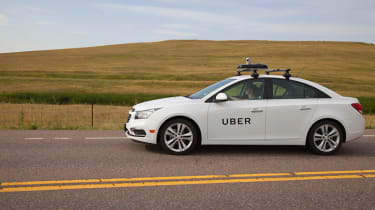 Uber will pay $245 million (177 million) in the form of company shares to Alphabet's Waymo after reaching a deal to settle a long-running lawsuit over the alleged theft of driverless car technology.

The warring companies struck a deal on a settlement last Friday, only the fifth day of testimony, bringing an end to a legal dispute that has plagued Uber since February last year. The settlement dictates that Uber will hand over a 0.34% equity stake to Alphabet's self-driving car unit.

On top of the fine, Uber has also agreed to not use any Waymo technology in its products, although Uber still maintains it never used trade secrets in its hardware or software.

The deal was reportedly the second attempt to settle the case, with Uber having already rejected a $500 million equity proposal from Google's parent company earlier in the week, according to sources speaking to Reuters.

The final settlement is also substantially lower than the $1 billion Waymo sought when the lawsuit was filed, and it also excludes the creation of an independent monitor to ensure trade secrets are not used. Waymo also initially sought a formal apology from Uber, which was rejected.

The case centred upon the alleged use of stolen industry secrets, thought to have been obtained after Uber bought self-driving tech startup Otto in 2016, founded by former Google engineer Anthony Levandowski.

Levandowksi is said to have taken 14,000 confidential documents with him when he left Google, secrets that Waymo alleged were then used to bolster Uber's self-driving research. While Uber acknowledged the existence of the documents, it always maintained that the information was never used as part of its designs, and that it had no idea as to how Levandowski obtained them.

The case has presented a significant obstacle to Uber's self-driving car research, which was pegged as being one of its most profitable future businesses and a means of diversifying the company.

It also allows current CEO Dara Khosrowshahi to get past of one of the many hangovers from the Kalanick years, having already dealt with the fallout from allegations of systemic sexism within the company.

While Khosrowshahi has maintained that the documents were not used, he did admit the episode could have been handled better.

"To be clear, while we do not believe that any trade secrets made their way from Waymo to Uber, nor do we believe that Uber has used any of Waymo's proprietary information in its self-driving technology, we are taking steps with Waymo to ensure our Lidar and software represents just our good work," said the CEO, in a statement.

"To our friends at Alphabet: we are partners, you are an important investor in Uber, and we share a deep belief in the power of technology to change people's lives for the better. Of course, we are also competitors. And while we won't agree on everything going forward, we agree that Uber's acquisition of Otto could and should have been handled differently."

In a statement to CNBC, a Waymo spokesperson said that the company remained "committed to working with Uber to make sure that each company develops its own technology".

29/11/2017: The latest twist in the self-driving-car case between Alphabet's Waymo and Uber sees the latter accused of "impeding" investigations into the company.

A day before jury selection was set to start, the trial has now been pushed back again, after revelations of a letter detailing Uber's efforts to spy on its rivals. The 37-page letter was sent by a lawyer for Richard Jacobs, a former employee, to Angela Padilla, Uber's deputy general counsel in May or June.

Jacobs told the court of an internal organisation inside Uber called "marketplace analytics" that sought out trade secrets, code and other details from rivals, according to a report in the New York Times. It also sought to "evade, impede, obstruct, influence" lawsuits against Uber, and used burner phones and devices that didn't connect to the Uber network to avoid creating a digital paper trail. Jacobs said some of the languages in the letter was "hyperbolic," according to the Guardian, but said he found the work ethically questionable.

The new information led the case's judge to put off the trial to give Waymo more time to investigate.

"I can no longer trust the words of the lawyers for Uber in this case," Judge William Alsup said. "If even half of what is in that letter is true, it would be an injustice for Waymo to go to trial."

He asked Uber to supply the full copy of the letter to Waymo.

"None of the testimony today changes the merits of the case," an Uber spokeswoman said in a statement. "Jacobs himself said on the stand today that he was not aware of any Waymo trade secrets being stolen."

Alphabet's self-driving car unit Waymo not only demanded the financial settlement but also wanted a public apology and an independent monitor at Uber to ensure it never used Waymo's intellectual property in future tech development, according to a report from Reuters.

It wasn't clear when the settlement offer was made, but the court case remains ongoing. Indeed, Waymo recently delayed the suit to give it more time to sift through an Uber due diligence report that was only recently made available to Alphabet's lawyers. Waymo has estimated the total damages at $1.9 billion.

Reuters' sources said no further settlement talks are planned at the moment.

The case centres on a former Waymo staffer named Anthony Levandowski, who departed the firm and started his own self-driving lorry company, which was subsequently bought by Uber. The suit alleges Levandowski brought with him key files on Waymo's laser sensor technology, known as Lidar. Uber has since fired Levandowski for failing to hand over key evidential documents to Waymo.

A due diligence report Uber commissioned before buying self-driving truck firm Otto has been revealed.

Uber has fought in court to keep secret the details of the report into its own acquisition of self-driving van firm Otto, with Google's Waymo pushing for the details to be released as part of its lawsuit against the ride-hailing firm. Waymo sued Uber, accusing former Google staffer Levandowski of bringing trade secrets regarding self-driving car technology to Uber via his startup Otto.

The due diligence document was produced by a third-party security firm, Stroz Friedberg, and reportedly reveals that Uber was warned prior to its acquisition of Otto that Levandowski had Google Waymo data, including 50,000 work-related emails from his time at Google, according to a ReCode report.

The document says Levandowski "(a) possessed Google information; (b) met with a number of Google employees about joining his start-up company; (c) met with Uber executives, while employed at Google, about forming a new company; and (d) destroyed highly confidential Google proprietary information he had stored on five disks on his personal Drobo 50, including source code, files, and software pertaining to self-driving cars."

While the report sounds damning, Uber noted that it was commissioned to ensure no Google intellectual property leaked to Uber via its Otto acquisition. "Their report, which we are pleased is finally public, helps explain why even after 60 hours of inspection of our facilities, source code, documents and computers no Google material has been found at Uber," a spokesperson said.

Uber fired Levandowski in May after it said he was failing to cooperate in the case.

Uber has told a court that it never ordered self-driving car researcher Anthony Levandowski to download technical files from his former employer, Google's Waymo, according to a recent court filing.

Waymo, Google's self-driving car research division, is currently suing Uber for what it says is theft of trade secrets, after it claimed that its former employee Levandowski took almost 14,000 research documents with him went he took up a new position at the ride-sharing firm. This, according to Google, allowed Uber to gain significant ground in its own research efforts.

Uber has since fired Levandowski, and he is not a defendant in the case, however a ruling hinges on his actions and what exactly Uber knew about them.

"This is consistent with the complete lack of evidence that such files exist at, or have ever been used by, Uber," the company said, in a court filing on Wednesday, seen by TechCrunch.

Uber alleges that Levandowski downloaded the files to ensure he received a $120 million bonus from Waymo, although exactly how the files would have helped him achieve this was not explained.

However Waymo point to Uber's own testimony in an earlier filing, which said that during a meeting on 11 March 2016, Levandowski had told then-Uber CEO Travis Kalanick that he had five discs of Waymo material.

"And even after finding out that he had Waymo materials in his possession, Uber never took any steps to prohibit Levandowski from using his 'treasure trove of files' in his work at Uber," said Waymo.

While Uber acknowledges that the meeting took place, it claims it had no knowledge of how they had came into his possession. Once the source was revealed, the company claims it wanted nothing to do with the discs.

Waymo has since refuted this claim in a statement to Recode, saying that the evidence "clearly shows that stolen information has already made its way into Uber's technology" and that "rather than do the right thing, Uber took part in a coverup, only firing Mr Levandowski after their actions were exposed in litigation."

The case is still on going and both companies due to appear in court in October.

Uber has fired Anthony Levandowski after the engineer failed to cooperate in the ongoing lawsuit with Alphabet, the parent company of Google.

Uber general counsel Salle Yoo outlined in Levandowski's termination letter, dated 26 May, that his failure to comply with a court order is the reason for his firing. In the letter, Yoo also wrote that "your failure impeded Uber's internal investigation and defense of the lawsuit".

A federal judge in the ongoing court case between Uber and Alphabet's self-driving car firm, Waymo, granted a preliminary injunction against Uber on 12 May that led the ride-hailing firm to remove Levandowski from any work on Lidar, and to return any stolen documents to Waymo.

Levandowski is accused of downloading 14,000 confidential files before leaving Google's self-driving division in 2016. He went on to start his own self-driving truck company called Otto, which Uber bought in August 2016, six months after he had left his previous employer.

Yoo goes on to underline that Uber required the engineer to have "destroyed all property and confidential information belonging to any prior employer" and by not complying with the court order it's a potential breach and warranty in the employment agreement and an "additional ground for termination".

Levandowski invoked the fifth amendment in order to not to incriminate himself and refused to hand over documents or answer questions during a deposition.

Uber has insisted its technology is different to Waymo's and there is no evidence it has the stolen files on its servers, although it did not check Lewandowski's computer in its search.