Could a chatbot serve my customers better while freeing up my staff? 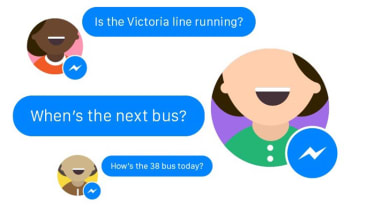 Chatbots are nothing new, as anyone who remembers Eliza will tell you. Developed in the mid-1960s, Eliza gave what appeared to be logical answers to typed input. It was an early, primitive example of artificial intelligence.

Now, chatbots are the norm and are significantly more accomplished. They can decode a user's input, as well as interrogate a database of possible results and serve up the best match. Apple's Siri, Microsoft's Cortana and Google's Assistant are by far the most versatile, but a growing army of brand-specific bots are boosting their numbers.

Chatbots don't take holidays, will never call in sick, and provide their masters with almost unlimited virtual customer service agents. Increasingly, they're also appearing on the platforms where their users spend much of each day.

Transport for London (TfL) launched its first bot this summer. It was a logical move for an organisation that already publishes myriad feeds showing everything from pollution levels to the read-outs of its bus stop screens. They're used by countless third-party apps but never, to date, by TfL itself, which is conspicuous in its absence from both iTunes and the Google Play Store.

Instead, it's been quietly building TravelBot, a Facebook Messenger bot that uses those same feeds to answer Londoners' transport queries.

"We're always looking for new channels to help our customers," said TfL digital product manager, Charul Gupta, when we asked why it had built a bot rather than an app. "Most of them are online and using messaging platforms anyway, so we know they're already there."

By piggybacking on Facebook, TfL's developers are left with more time to work on content and its back-end, while the audience already has all of the tools they need to access the bot's output.

"Getting users to install an app is difficult," agreed Sameera Vanekar, co-founder of a chat-based productivity tool called AceBot. "With the kind of userbase that Slack, Facebook Messenger and Microsoft Teams has, it didn't make sense for us to build our own platform for our bot, rather than sitting on a platform that a customer already has on their phone."

Launching on existing platforms lends a bot an air of familiarity, which is something Habito, a digital mortgage broker, recognised when choosing Facebook for its bot. "Many people already spend a lot of their time on Facebook," explained Jenny Watts, Habito's managing director of marketplace. "So, with our chatbot they can interact and engage with us on terms they are already comfortable with." Consequently, in a financial environment, traditionally dominated by forms and, occasionally, face-to-face meetings, moving everything to Facebook can make it feel less threatening, and go beyond simple line-based interaction. In Habito's case, this even extends to offering a Mortgage 101 course that aims to familiarise the company's customers with fundamental concepts.

Tangible benefits for customers and providers

A course like that might be enough to pique a customer's interest, but a bot must provide a more tangible benefit for the developer if it's to be worthwhile. This could be a return on investment or a cost saving.

"We run an SMS arrivals service, which costs customers to access, and costs us to run," said TfL's Gupta. "If we see that customers are happy to switch to the TravelBot, we'll analyse our existing systems to see what we could decommission, or share the load between the two platforms."

Habito's bot has "halved the amount of time brokers spend on each case," said Watts. "We use machines to do the repetitive work that they're good at, like form filling, document collation, and product research, which frees up our mortgage experts to concentrate on the areas where they can add the most value answering questions from our customers, looking at cases that aren't straightforward and guiding people through the process."

Lightening the workload this way could be key to reducing staff overheads, or simply increasing productivity by sharing the existing burden with a virtual team member.

"[Our] users feel like they're working with an assistant," said Vanekar, who describes how AceBot will dig out background information from LinkedIn and other public sources when you drag a snap of a business card into the bot.

The service uses Microsoft's LUIS to handle linguistic interpretation, which Vanekar credits with helping it move away from traditional form-based interaction.

"If you're using a regular chatbot to handle sales in the field, you'd have to work through four or five questions just to collect one line item," she explained, but with natural language processing "you can type in a line saying you wants to order, say, ten jars of cookies, and the system will link to an internal database and complete the processing for you."

Every bot will always be an ongoing work in progress, learning as it runs. We tested TfL's TravelBot within a week of launch, and although it could warn us of bus delays, it had trouble with tube timetables, and directed us to the TfL website. TfL promises things will improve over time.

"We're logging what our customers are asking, and that's helping frame our future roadmap," said Gupta. "We might see that, although we've provided certain features already, customers are asking about something we haven't covered. Once we know this we can iterate the system and learn from the feedback."

In its first week, TravelBot handled 30,000 queries from 3,000 users, despite being only soft-launched. As those numbers grow, its rate of learning should accelerate.

Habito is also iterating its product. "We'll be improving and evolving the chatbot to include things like affordability calculators and natural language processing, so it can understand any mortgage-related question you can throw at it."

Yet it's likely to be a while before every bot is perfect. Habito spent a year developing its bot, much of it in response to advisory interviews with potential customers, but recognises that, however good it may be, there will always be outlier cases that need a human response. "By replicating large parts of the broker conversation using an AI-backed chatbot we're giving customers quotes more quickly," Watts explained, "[but] we don't just use the chatbot. We also have human mortgage experts available on live chat seven days a week."

This makes sense. In the short term, at least, no AI system is going to learn quickly enough to keep up with users' evolving demands, which is why Facebook's nascent M, currently only available to testers in California, falls back on human operators when it can't produce a meaningful response.

TfL has adopted a similar hybrid approach, allowing passengers to contact humans through the same interface as the bot. "Some queries are more complex; if you're applying for a refund or need to talk about your Oyster card, for example, and in other cases the customer might not want to share their private information with an app," Gupta said. The hybrid system handles these instances, but rather than seeing this as a burden staff supporting a bot it would be better to see it from the other direction. To Gupta, automating where possible means these agents, who would once have been working full time answering queries, are free to handle only the most complex and pressing requests.

Every bot will be unique, and so will the rationale behind deploying it. It will have to balance the needs of the customer and the goals of its business. Getting this initial equation right is difficult. Once it's up and running, though, your customers will craft its development and provide customer research that could return your initial investment many times over.