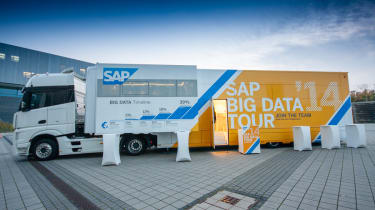 Teradata today accused SAP of stealing trade secrets to build its flagship HANA platform in a decade-long campaign of deceit and anti-competitive behaviour.

However, SAP's real purpose was allegedly to steal this IP from its rival, and once it had done so, Teradata claims it began building HANA, its own speedy data-processing platform that today underpins almost every SAP product available.

"SAP is now attempting to coerce its customers into using HANA only, to the exclusion of Teradata," a spokesperson for Teradata said.

An SAP spokesperson told IT Pro: "SAP was surprised to learn of the complaint filed by Teradata earlier today in the US District Court for the Northern District of California.  Although SAP generally does not comment on pending litigation, SAP may issue a statement, if appropriate, after it has had an opportunity to review the complaint."

Aside from unspecified monetary damages, Teradata is also seeking an injunction "barring SAP's illegal conduct", and has asked the court to offer any other relief available under law.

The specific charges filed against SAP in the District Court for the Northern District of California cover a complaint for trade secret misappropriation, copyright infringement, violation of the Sherman Act 1 and 2, and violation of the Clayton Act 3 (both are antitrust acts).

"SAP's anticompetitive strategy has resulted in irreparable and ongoing harm to Teradata in the form of lost customer relationships and opportunities, lost profits, and continued erosion of market share in the very industry Teradata pioneered," Teradata's filing reads.

The product in question is its flagship offering, Teradata Database, which the company claims it has spent four decades refining since its original conception in the 1980s.

Under the Bridge Project joint venture, the firms agreed to build a joint offering, Teradata Foundation that would power SAP's ERP applications with this technology, accessed via SAP's Business Warehouse tool.

However, at the same time, SA co-founder Hasso Plattner and then-CTO Vishal Sikka were building their own competing database - SAP HANA - in order to revitalise "SAP's lackluster and outdated product offerings by developing a new, faster database architecture," the filing alleges.

"Dr. Sikka quickly restructured SAP's engineering teams to develop and deploy SAP HANA in less than a year, an extremely short time frame for a project of such magnitude," Teradata claims, eventually bringing in hundreds of millions of dollars.

Teradata's protected IP was central to HANA's development, the company claims, citing various breaches of confidentiality agreements between the firms, including SAP engineers working on the Bridge Project also working on the HANA project.

It claimed SAP engineers used Teradata IP to solve challenges related to building HANA "at the direction of Dr. Sikka".

The vendor said it only discovered SAP's alleged behaviour after a Der Spiegel article exposed it in 2015, which led to the filing of the lawsuit.