AI tools will be expected as the norm for next-gen workers, says Salesforce

It won’t be long before AI-powered assistants are everywhere we go, according to Salesforce exec 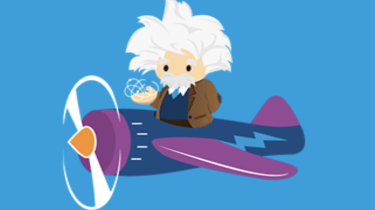 Artificial intelligence and smart assistants will soon become an expected norm in the workplace, with people lefts miffed if they do not have to the tool in work that they grew up with at home.

So says Michael Machado, senior director of product at Salesforce Einstein, who spoke to IT Pro during the cloud giant's Dreamforce conference in San Francisco this week.

"When they enter the job market, they will expect behaviour to match with that. They're not going to enter and expect a series of 25 clicks to get their job done."

Furthermore, AI won't just be something that's expected within the confines of the office walls people will expect it to be everywhere.

"You're seeing Einstein in a mobile application today, but it's not restricted to mobile. It can be exposed via a Quip document, or a smart speaker, or the idea we're in a conference room and you ask if you can record and everyone starts listening in," he added.

"That, I think, is very powerful. Now you're talking about Einstein travelling with you and CRM adjusts from listening to suggesting. That's what I believe is going to be a factor [in terms of adoption]. I don't want to do pure automation. I don't want to make data messier, I want to make data easier to get into Salesforce. And, I think, that comes from this idea that everything we're building takes unstructured data from any source and can embed that back into Salesforce."

Talking more generally about AI, Machado said it was equally as powerful for smaller businesses as it would be for larger enterprises.

"It's become a tidal wave for customers. They want in even if they don't know how they're going to implement it right now they want us to be their guides - but they know that right now their users are asking for it," Machado added.

"They want it as a companion. [It's] a case of Don't make it a barrier for getting my job done, make it a tool to help me get my job done.'"

Importantly, in order to be able to fully take advantage of the benefits, Machado stressed the need for high-quality data. He said it provided more "signal" for AI to work from and suggested such high-quality data could help others learn from an organisation's best representatives and allow other reps to truly reach their potential.

"That's a powerful story to be telling and differentiates us in the market. We're not trying to cheat this by building a bot that goes back and forth. We know the data in Salesforce and we know how hard it is to build a conversational agent on top of that. We've taken a very direct product strategy that is about unstructured data inputs into Salesforce with a talk and tap experience. And that's been resonating with customers," Machado added.

"[People] don't expect Alexa to list off their top 20 opportunities some of which may be  zxy4444 No-one wants to hear that! It's the idea of this hybrid approach between voice and user experience and user interface is really going to be our long-term strategy."