Metallica rocks out to the cloud: Dreamforce 2018 View from the airport 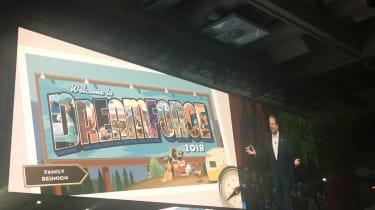 There we have it. Dreamforce is over for another year. San Franciscan traffic, queues and establishment stress levels can get back to normal.

So, apart from it all being over, what are the key takeaways from the week that was?

David Blaine, Chris Rock, MC Hammer and will.i.am were all in attendance for Marc Benioff, Salesforce's founder and co-CEO's keynote. Who knew, but apparently, they are massive SaaS fans.

In front of the assembled audience of celebs and the rest of us, Benioff did his usual thang during his opening keynote. However, it felt like much of his thunder had been stolen by announcements going official prior to his big gig some of them weeks or months ahead of the event. And the Apple/Salesforce love-in was little more than a sidenote during proceedings.

But that didn't dampen his enthusiasm or that of the crowd. Far from it. He was typically energetic and was happy to share the stage with a supporting cast of Salesforce execs, customers and other special guests.

One such special guest was Lars Ulrich, founder and drummer or rock band Metallica. He wasn't just there as a friend of Benioff, nor was he there because his band was headlining the closing party and charity fundraiser ("We're practically the Salesforce house band," he quipped in a nod to the fact this is the band's third appearance at Dreamforce). No, Metallica is now using multiple Salesforce products...

I know, I know. It feels like we've slipped into a parallel universe, but I kid you not. Ulrich stood on stage as a real-life Salesforce case study. Once I'd realised I wasn't dreaming and saw an official press release that backed up what was going on on stage, it actually started to make sense. 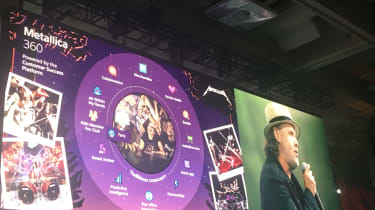 Metallica is using Marketing Cloud to provide a single view of its fan base across multiple channels, while its newly launched website is powered by Commerce Cloud.

"The music business is in constant transition. Things are always changing, like in the tech world. It's a wild west out there we've always got to keep up on the latest trends and technologies," Ulrich said.

"Everything is shrinking into your mobile device. That's very exciting as you get to carry everything with you... The buying of concert tickets and even the concert experience itself can start on the mobile phone."

While that background is quite interesting, what makes the Metallica/Salesforce tie-in more insightful is the fact it, ultimately, stems from ensuring fans are happy.

"[It's] to try and heighten our fan engagement... We prioritise fan engagement. Always have, always will. Years ago, when we were starting up, every time we would get a fan letter, I would sit down and answer each one personally with pen and paper," he said.

"I'm an only child. [It's about] a sense of belonging to something bigger. I have always been and will always be Metallica's number one fan"

While Metallica somewhat stole the show, the conference had a number of other highlights and key takeaways, with each day focused on a different theme.

Tuesday was all about trust, with Salesforce talking about the importance of factoring in ethics in the context of technology.

Wednesday's focus was innovation and AI two really hot topics for Salesforce and the wider industry.

Thursday shone a spotlight on equality and sustainability with Salesforce remaining committed to being a diverse and inclusive employer as well as an environmentally friendly and responsible business. 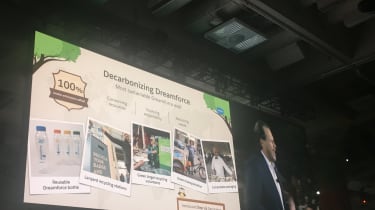 The final day of the show, Friday, was all about personal improvement and mindfulness both important in today's fast-paced and often unforgiving world.

Benioff also talked about the value not just financial of the Salesforce economy. Benioff said analyst firm IDC predicts that the Salesforce economy will be responsible for the creation of 3.3 million new jobs by 2022. There will be 10 million Trailblazers in existence in the same time frame, too, Benioff added, whilst highlighting that one in four of those using Trailhead as a learning tool went on to find a new job. 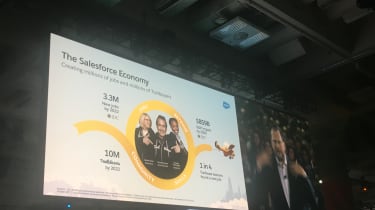 In addition to the Apple mobile experience partnership news, Salesforce announced an extended alliance with AWS and took the wraps off a new insight tool dubbed Customer 360.

The cloud giant also talked about the role of AI specifically how tools like Einstein Voice will enhance productivity and also warning about the dangers of AI bias and how to ensure we don't impart societal biases onto technology and innovation.

"It's like a family reunion. I'm deeply grateful to all of you," Benioff told delegates.

"This is a celebration of trailblazers. This is the biggest and greatest Dreamforce ever. There's no question about it There are so many more trailblazers coming. And your vision and the way you see the future is inspiring me."