The team gives their take on what they think the year ahead has in store... 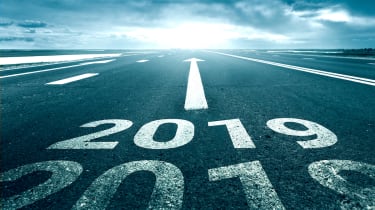 "Last year, I predicted 2018 would be the make or break year for cryptocurrencies, and perhaps blockchain's grand entrance as a mainstream business tool. I was right with the former, but where there was once hype and tech evangelists prophesying the end of fiat currencies, there is now only disappointment and shattered dreams. Cryptocurrencies aren't dead, but they've become so dormant that the everyday reader has most likely forgotten about them.

"Blockchain, on the other hand, has made quite the impression. The industry is moving slower than many predicted, but where major projects were once few and far between, they have become a weekly occurrence. Unfortunately, industry collaborations and major announcements so far seem to be limited to the finance and supply chain industries, and 2019 will surely be no different. That's ok, though not every new idea needs to be all-encompassing.

"One area of tech that will be all-encompassing is artificial intelligence and IoT, and 2019 may be the year that we start to see technologies like these enter public life beyond chatbots and smart home gadgets.

"Unfortunately, there isn't a good track record for this sort of stuff (just look at the chaos at Gatwick airport in the past couple of weeks), and the government, despite its best efforts, is still at a loss when it comes to regulating the use of artificial intelligence. Right now we have a dozen public sector bodies, government departments, and research groups all working on the ethical development of AI, but very little in the way of coherent oversight. There's a real danger that the narrative around the application of these technologies will be consistently negative, which could boil over to outright opposition."

"AMD has spent this year closing the market gap between it and Intel, and if Intel isn't seriously worried then it hasn't been paying attention. Unless Intel pulls something seriously impressive out of the bag, AMD is going to continue gaining ground and although the company has (finally) unveiled its repeatedly-delayed 10nm architecture, I'm not holding my breath that it'll actually release on schedule.

"More to the point, there's no word on when it'll be coming to its range of Xeon server processors, leaving AMD with free reign to keep offering data centre customers higher core counts at a lower price - a strategy that has resulted in some very impressive hardware from the likes of Dell and HPE.

"Speaking of whom, Dell looks set to continue dominating the enterprise IT landscape with an iron fist, adding a huge growth rate of 22% across its storage business during 2018 to its ever-growing list of achievements. The company is re-entering the public market, and although CEO Michael Dell found it restrictive the last time, this time the company (and indeed Dell himself) likely have enough clout to spend much more time setting the agenda."

"With TfL data, Birmingham-based programmer Matthew Somerville, created an interactive tube map to track trains in real time as they move around the London Underground. It included data on which direction trains were travelling, which line and route it's on and how long it will take to reach the next stop.

"There are a number of interesting use-cases in sectors such as healthcare, business, banking and property and we hope to see more innovative uses of open data in the coming year."

"With 2018 a year to forget for many high-street banks, particularly the likes of TSB which suffered a cataclysmic IT failure, they'll be desperate to stake a claim for relevancy in an increasingly digitised space.

"In fairness, Barclays ended the year on a high with its plans to use technology to proactively block certain transactions, like in pubs and betting shops if users choose to turn this on. But this example is frankly an outlier, and 2019 may be the year that legacy banking's digital ineptitude comes back to bite. And hard.

"Whether it's badly-written mobile apps or the lack of tools for consumers to gain true ownership over their spending, legacy banking has been lagging behind for years. Investing in blockchain to quicken transactions, or buying into the collapsing bandwagon that is cryptocurrency, is irrelevant, as most consumers won't care much for what are still quite abstract concepts.

"Next year, we may see at least one major household name fall over and make way for the likes of Monzo and Revolut, which have been quietly gaining momentum for years and attracting tech-thirsty users in their droves."

"I predict that home speaker appliances, such as Google's Home and Amazon's Alexa, will reach an average of one per household in the UK. The crude rationale being that these products are still on an upward curve and there are so many more ways in which we can benefit from them. Daily/hourly usage will also increase as they become more central to our lives, and we'll see advertising weaved into their usage too.

"When it comes to business, security is going to remain the biggest area of concern, and we'll likely see the first 1m GDPR fine. There will still be breaches and plenty of insecurities at the highest level, and large companies who should know better have been slow to fully secure themselves and prove a safe house for customer data."