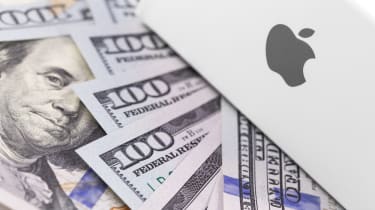 Qualcomm CEO Steve Mollenkopf has said that Apple's demand for a $1 billion 'incentive payment' for the chance to supply modems for iPhones is why the company opted for an exclusivity agreement.

Mollenkopf made the comments on Friday while testifying at a federal courthouse in San Jose, California. His comments came as the latest twist in an ongoing legal dispute between the two tech giants.

In 2011, Qualcomm sought to be the sole supplier of modem chips for Apple's iPhone range - these help mobile phones connect to wireless data networks. The payment was meant to ease the technical cost of swapping out Infineon chips, which iPhones originally used, and replacing them with Qualcomm's chips.

As part of the deal, Qualcomm agreed to give Apple a rebate, details of which have not been disclosed, but Apple could choose another supplier at the loss of the rebate, effectively increasing the cost of Qualcomm chips if it did so.

This, however, has been seen as anticompetitive conduct carried out by Qualcomm, as such a move could be seen as Qualcomm having sought to preserve its dominance in modem chips and exclude competitors, such as Intel.

During his testimony at the San Jose federal courthouse in California, Mollenkopf said that Apple demanded the $1 billion without any assurance of how many chips it would buy, which, Mollenkopf claims, forced the chip maker to pursue an exclusivity arrangement so it could ensure it sold enough chips to recover the incentive payment.

"The risk was, what would the volume be? Would we get everything we wanted, given that we paid so much an incentive?" Mollenkopf testified.

Earlier the same day, Apple's supply chain executive Tony Blevins testified that it was the company's practice to pursue at least two suppliers and as many as six for each of the more than 1,000 parts that make up the iPhone.

Last Wednesday, Tim Cook spoke to CNBC's Jim Cramer, on the Mad Money show and said that many other authorities agreed with their position on Qualcomm's policies.

"The issue we have with Qualcomm is that they have a policy of no license no chips," he said. "This is in our view illegal and so many regulators in other countries agree with us. And then secondly, they have an obligation to offer their pattern portfolio on a fair, reasonable and no discriminatory basis. And they don't do that."