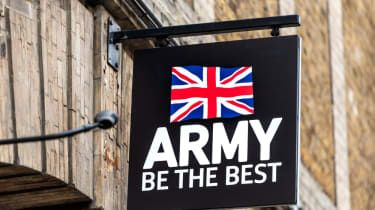 A senior military officer told MPs on Tuesday that the MoD, British Army and its contractor Capita had "made some bad mistakes" with a contract to outsource its recruitment.

The original contract awarded to Capita in 2012 was part of a 1.36 billion digital transformation project to reform the army's recruitment process, but it saw several failings, including mass delays to an online recruitment tool and rising costs. According to the National Audit Office (NAO), the army has failed to hit the recruitment targets every year since the contract began.

Speaking to the Public Accounts Committee, seen via Forces.net, Lieutenant General Tyrone Urch detailed the multiple flaws with the forces recruitment contract, laying blame at both Capita and the army itself. Urch said that the Army's approach was "naive" and called its insistence on using its Defence Information Infrastructure (DII) IT system a "big mistake".

DII is a secure military network owned by the MoD and developed in partnership with the Atlas Consortium. Deploying DII proved to be a long and expensive project that ran over its estimated time frame and almost doubled its estimated costs.

"In hindsight, knowing how badly performing DII was, that was a big mistake and yet, we kind of insisted on it with Capita. And they tried to do that for a number of years until 2014."

The NAO savaged Capita's handling of the IT project saying that the firm failed to recognise the level of customisation the army demanded. Once the system was up and running, Capita staff were also found difficulties in processing applications, leading to 13,000 few applications between November 2017 and March 2018.

"I think we allowed Capita, instead of being more persistent, to engage in a centralised call system way of doing business in Uphaven at the National Recruiting Centre," added Urch. "And in hindsight, we lost our ability to nurture our candidates and to look after them and to kind of pay them the attention they deserved.

"From an army's perspective of things that we got wrong, we had a hugely complicated career structure in the British Army. Something like 240 career employment groups and we kind of just assumed naturally that Capita would get on a do that and just sort of be able to take that on board. And the program that we actually insisted on, with 10,000 lines, or areas of contract compliance was just way to complicated."