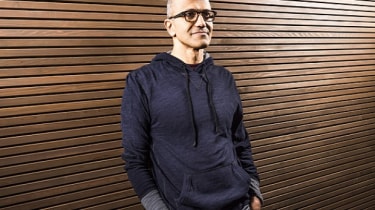 In December 2013, I wrote a piece profiling the contenders for the then-vacant Microsoft CEO position. Of the eventual winner, Satya Nadella, I wrote that "if (and it's a pretty stonking if) Microsoft sees its future primarily as an enterprise company, then Sat Nadella undoubtedly has the CV for the job.

"Nadella is a confident and calm public speaker - the antithesis of Ballmer's highly strung, hyperactive stage act - but lacks the sparkle and charisma that the figurehead of a consumer-facing company arguably needs, making him more a Tim Cook character than a Steve Jobs. A strong candidate, certainly, but perhaps not a sufficiently rounded one."

Five years on, I would say that analysis has stood the test of time - bar that final clause. He's proved more than "sufficiently rounded" to excel in the CEO hotseat.

Let's just remind ourselves of the mess he inherited. When Nadella took the reins at the start of 2014, Microsoft was close to finishing its disastrous $7 billion takeover of Nokia's Devices and Services division in a futile bid to defibrillate Windows Phone. It was stuck with arguably the worst OS Microsoft had ever released, Windows 8. And the company was despised by almost everyone else in the industry, largely thanks to Steve Ballmer's predilection for shooting his mouth off, describing Linux as "a cancer" amongst many other ill-considered broadsides.

Sure, Microsoft was still making plenty of money, but its share price had flatlined for the best part of a decade. It was the Bryan Adams of tech - still living well off a massive hit in the 90s, but nobody's idea of the future.

The company is making more money than ever before, more than the days when Windows 95 was an off-the-charts hit.

How has Nadella pulled it off? Well, it goes back to the very first line of that profile I wrote five years ago: he decided to make it an enterprise company.

When Nadella made his first public speech as CEO of Microsoft, he didn't mention Windows once. His vision was all about the cloud and, boy, has he delivered. If you drill down into Microsoft's financials you'll see that Windows revenue is roughly stable, Surface hardware and Xbox revenues are mere footnotes, and that the real growth is coming from two divisions: Productivity and Business Processes and Intelligent Cloud.

The former of those includes products such as Office, which over the past five years has been migrated to a subscription product with more predictable and growing revenue. Intelligent Cloud, meanwhile, covers products such as Server and Azure, which is the biggest rival to Amazon Web Services when it comes to servicing the cloud needs of big businesses. The sexier, consumer side of the business has been entirely overshadowed by enterprise. We're now in the once unthinkable position where Microsoft could comfortably survive without Windows.

Nadella has also brought a much-needed pragmatism to Microsoft. The Windows Everywhere (no matter how badly it fits) ethos has gone. Windows Phone and the whole Nokia misadventure has been sensibly abandoned. Microsoft is now more concerned about getting its apps onto Android and iOS than it is about trying to be the next Android or iOS. It's set to abandon the Edge browser's rendering engine and unveil a new browser (possibly with the Edge front-end) based on Google's Chromium.

Nadella's not one for fighting losing battles.

Unlike Ballmer, he's not picking futile fights, either. Nadella sensibly recognised that if Microsoft wants to be a force in cloud computing, it has to play nicely with others, not alienate them - especially the open source community. Microsoft has gone from branding a Linux a "cancer" to listing Linux distros in the Windows Store, to make life easier for developers. In 2017, Microsoft was the world's biggest open-source code contributor, according to data released by the code-sharing service GitHub.

Earlier this year, Microsoft announced it was buying GitHub for $7.5 billion. A few years ago, that would have brought the open-source community out with pitchforks. Now, while there are mutterings of dissent, it's an sign of how well Microsoft has made its peace with the open-source community that the takeover looks set to proceed without huge protest. "Developers, developers, developers," is now more than a sweaty Ballmer meme - it means something.

Quietly and intelligently, Nadella has transformed Microsoft into a company that's fully geared to compete in the 21st century, not clinging to what made it formidable in the 20th. Promoting him could well be the best decision Microsoft's ever made.