Volkswagen to replace retirees with robots

Car manufacturer says up to 7,000 jobs will be automated, but the losses will be largely absorbed by 11,000 people eligible for retirement 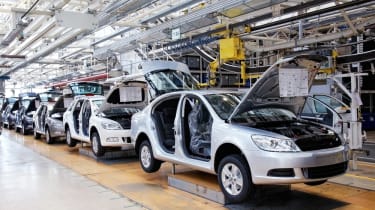 Volkswagen has said that up to 7,000 job cuts will be made by 2023 to make way for more automation, but these losses will be absorbed by 11,000 workers retiring in the next four years.

The car manufacturer is looking at ways to reduce costs and improve efficiency to step up the pace of its transformation to make Volkswagen fit for the electric and digital era.

In the company's transformation plans, nonstaff overheads and personnel requirements in administration are to be cut by 15% each. With its focus increasingly moving towards digital transformation, Volkswagen will be investing 4.6 billion in IT systems to digitise administrative processes

This means the car manufacturer will have less need for human workers. Job losses as a result of automation is a growing debate, with arguments for an against it. But ultimately, it's inevitable as rapidly advancing technologies have always disrupted jobs.

Over time, however, these losses have been balanced out as new tech often creates as well as culls jobs, but there is a moral obligation on employers to implement new technology responsibly. In this respect, Volkswagen has put forward a long-term plan, with a plausible reason for the job cuts.

"The company estimates that the automation of routine tasks will result in the loss of between 5,000 and 7,000 jobs by 2023," a company spokesperson said on Wednesday. "That can be absorbed by not recruiting replacements for employees who leave the company for retirement reasons."

"The potential number of employees born during the next three defined periods eligible for partial retirement totals about 11,000. Restructuring along the demographic curve is therefore possible."

Volkswagen says it has given its workforce a job security guarantee until at least 2025. IT Pro approached the manufacturer for more details, specifically a clearer definition of "partial retirement" and whether these retirements where originally factored in its plans or if it's just a coincidence. The car manufacturer had not responded to our request at the time of publication.

Automation in the car manufacturing industry is certainly not new, but it's also not without issue. In 2017, a man was crushed to death by a robotic arm in a German Volkswagen factory.