The company has finally launched its long-rumoured streaming service 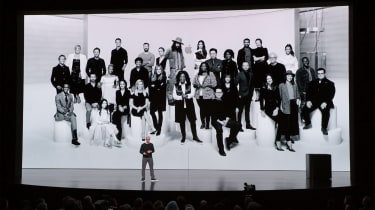 Apple has launched a huge slate of new services, expanding the company's presence in sectors such as video, news, gaming and finance.

Announced at a live event at the company's Cupertino headquarters, the biggest news was the arrival of Apple's long-expected TV streaming service, Apple TV+. The company has partnered with a laundry-list of top talent to create a slate of new original content, including new shows from Steven Spielberg, J.J. Abrams, Kumail Nanjiani and even Oprah Winfrey.

Apple TV+ will be arriving in Autumn. The service's original programming will be ad-free and fully downloadable for offline viewing. Pricing and availability dates for the service are being withheld until Autumn.

This announcement was preceded by a number of updates surrounding the pre-existing Apple TV app, including the news that the app will be coming to smart TVs from the likes of Samsung, LG and Sony and that the service is expected to be available in 100 countries by the end of the year. The Apple TV app will also include the ability to subscribe to and access streaming services from within the app, as well as the ability to purchase specific individual cable channels.

The company also announced Apple Arcade, a subscription service for games on its App Store. The company will be offering more than 100 exclusive games via Apple Arcade, which will not be available on other platforms, or for non-subscribing users. Apple Arcade will be launching in Autumn, although full pricing has yet to be announced.

One of the most shocking reveals was the introduction of Apple Card, a new financial offering that provides users with a full bank account, powered by Goldman Sachs and MasterCard. The digital card will be accessible through the Wallet app and is accepted anywhere that supports Apple Pay, offering 2% cashback on all purchases. The company is also providing a physical card, which will be cut from titanium and feature only the owner's name, with no identifiers such as a signature or card number. Apple Card is coming to the US this Summer, but there's currently no word on when (or if) it will be coming to the rest of the world.

Apple News was expanded too, with the addition of magazines, all of which have been specifically formatted and designed for iPhone and iPad, including digital features like video covers, integrated infographics and AI-driven content recommendations.

The service - which, like the new TV package, is dubbed Apple News+ - will also include select newspapers like the Wall Street Journal and the LA Times, as well as a handful of digital publications. Apple News+ will be an additional subscription of $9.99 per month with free Family Sharing included as standard. It will be coming to the UK in Autumn, with UK pricing yet to be announced.

The announcements distinctly underscore Apple's ongoing pivot from hardware sales to services and subscriptions as its primary revenue driver. The company has been experiencing a slowdown in growth as sales of recent iPhone models continue to perform below expectations. Services like Apple Music and the App Store, meanwhile, have become a substantial chunk of the company's revenue - a chunk that it will be hoping to augment with the addition of several new streams.