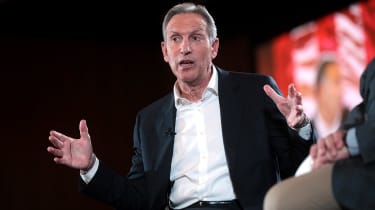 Significant enhancements in products and technologies must have a disruptive effect across an industry, or shouldn't be described as truly innovative, Starbucks founder Howard Shultz has claimed.

Reflecting on his experiences in business, Shultz said his company prides itself on what he calls "true innovation", and that this stems from a host of processes that includes 'cannibalisation'.

"The question is, what is innovation? We're not a company that has much proprietary technology; anybody can open up a coffee store," Schultz said during a one-on-one keynote with Epicor's CEO Steve Murphy at the firm's annual Insights conference.

"Yet we were able to completely crack the code on creating a mobile app that is probably now the most ubiquitous retail mobile app in America, and really changed our business.

"But if I go back a few years, people celebrated innovation in Starbucks as if a line extension or new flavour or new packaging was innovation. That's not innovation. Innovation has to be disruptive. We pride ourselves on trying to disrupt the marketplace."

Part of this process, Schultz continued, involves 'cannibalisation', or in other words, extreme internal competition, whether this is opening stores next to one another or launching directly competing products.

The other key to finding an innovative streak was decentralising how ideas and processes are generated, especially in companies that serve customers across different markets.

"One of the real turning points of the company in the last four or five years was that we let the leaders of the company regionally, and especially internationally, control their own business," Schultz continued.

The former Starbucks CEO also warned businesses against being motivated by chasing profit alone, elaborating that in his experience it led to severe problems at Starbucks around a decade ago.

After the "cataclysmic" financial crisis in 2008, Schultz returned to the helm as Starbucks' CEO after eight years taking a backseat. On his return, he found that his company's sole pursuit of raising the value of its share price led to management overseeing a multitude of massive errors.

"The self-induced mistakes that we had made during 2007 and 2008 were linked to a carcinogenic disease that entered Starbucks. And that disease was Hubris," he told delegates.

"Starbucks had been on a magical carpet ride for all these years where everything we touched literally turned to gold. And the hubris that took place was that growth and success began to cover up lots of mistakes, as well as the management of the company focussing on a false narrative that the stock price was their reason for being."

"They were chasing growth and doing everything they possibly could to make sure SP did not go down. Sure enough, all these things caught up with the company at a time when this crisis in the country and the world was taking place."

He highlighted a specific example when somebody decided to generate more revenue by diluting the coffee 2-4%, suggesting customers wouldn't notice a minor difference. But, Schultz said, people did, and there was a sense of attrition.

Moreover, the company's health, itself, was in a far worse state than he had imagined, as he discovered when taking a deep-dive into business operations. He learned that at one point Starbucks had eight months left of cash insolvency: "No-one knew that."