Orange will co-innovate with businesses on its 5G network

Orange Business Services held its summit in Paris, shedding light on the company's vision of 5G for businesses 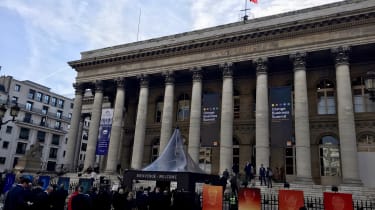 Orange Business Services (OBS) outlined its vision for 5G technology and revealed plans to how it will help enterprises embrace the new standard of mobile connectivity.

Stphane Richard, CEO Orange opened the company's 5G summit in Paris by declaring "5G is going to be a real game-changer", which is something we've heard from nearly every carrier and vendor in the past year leading up to the impending launch of the network and would come as no surprise to regular readers.

Aside from the usual hype that telcos tout in order to maintain public excitement, Orange did have some interesting things to share regarding its vision for the future of 5G, providing a touch more insight into how carriers are viewing the deployment of the technology.

One of the key takeaways from the event was the company's notion of 'co-innovation' which, on the face of things, is a fairly empty term that even guest speaker Jean-Philippe Bahuaud, VP strategy and plan at Renault Group, conceded to be somewhat meaningless.

What OBS means by co-innovation is the interaction between business and telcos, building the technology as B2B-centric and designing the new tech around specific business and industry needs.

"With 5G, we're moving into the era of internet of enterprises, the era brings together firms and forces them to dialogue with each other," said Helmut Reisinger, CEO of OBS. "For us, this dialogue means augmented firms can work with each other and data sharing becomes vital."

"5G is an excellent playground for co-innovation," Reisinger enthused, and explained that the notion is the key differentiator between Silicon Valley's progress in the 5G space and the EU's.

He said that there is very little difference between Silicon Valley and the EU in terms of available talent and funding, the two regions have both in abundance, the main difference is that Silicon Valley co-innovates with enterprises, which leads to an increased rate of learning.

This learning comes from being able to pump out prototype use cases much faster and learn from them in how they operate in the scenarios for which they were devised. This is why OBS wants to place a stronger focus on this in the future.

Elsewhere, another focus for Orange is in network slicing, a concept we were first introduced to at MWC in February by Oracle's John Lenns, which seemed at the time as an idea that was so far in the future that it needn't be studied too heavily right now, but Orange disagrees.

It thinks that network slicing will be a key component unique to the 5G network. It's currently possible to an extent over 4G, however, the power of it will only be seen when 5G comes knocking.

It involves being able to segment a portion of the network and prioritise it for more critical purposes. These could include an emergency vehicle's on-board computer to receive real-time traffic updates to attend or exit an emergency situation at speed.

A possibly more relatable example would be that in the family car - the 5G network could be segmented to give a greater slice to the driver and the car's mission-critical functions leaving a smaller slice for the kids streaming Netflix in the back seat - a much less important function.

Another example would be the prototype use case developed between Renault and French magazine Challenges. The two partnered on an augmented editorial experience which gives users premium content that's voice-operated and allows them to interact with the magazine without looking away from the screen. This would fall under the lower-priority slice of the network but goes to show what kinds of things connected cars could be capable of aside from creating masses of data sent back to manufacturers.

"In 2015, companies were producing 30% of all the data that existed in the world and by 2025 that figure will double," said Reisinger.

This means that organisations will be producing the majority of the world's data, be it through a simple newsletter sign up or through IoT-enabled GI shoes for the workplace to track employee movement. Because of this, Orange was keen to stress the importance of security in the technology as standard.

"Vigilance in cyber security will be important - vulnerabilities will be smaller but will exist within your own business networks," said Richard. "We're talking about sophisticated equipment and there is no room for backdoors or contractors that are not up to scratch." We can only speculate to whom Richard was referring there.

We've heard it all before

While the insight into 5G's future and more pertinently, OBS's view of 5G for enterprises such as co-innovation is nice, we can't help but think most of what was said on the day has all been heard before.

To take a somewhat reductionist stance on things, Orange said almost nothing new other than what's already been said by every other telco and carrier. I was hoping Richard's opening remarks wouldn't set the tone for the rest of the morning but unfortunately, they did.

Over the course of the proceeding 90 minutes, government officials, the head of France's rail network and other industry leaders took to the stage to harp on about the excitement that everyone should have over 5G and what the potential use cases are. It was like being back at MWC.

I remember hearing that 4G gave rise to Uber back in Barcelona and reference to that was made again today - we don't even know the use cases that are going to be made possible with 5G! 'Wow,' I thought - at no point. Despite getting a little bit excited myself a few months ago hearing all the promises around 5G (see below): the next Uber, safer roads etc. I couldn't help but think I'd stepped back in time.

2: Some tech companies exist today purely as a result of mobile networking advancements, namely Uber with the 4G's inception, and it's exciting to think we could be on the cusp of something as ubiquitous as everyone's favourite ride sharing app when #5G comes knocking

It's 2019, the year the first 5G networks are launching which means the time for questions is over and we now need concrete facts to substantiate the hype. It's all well and good promising the most amazing use cases but if we don't even know how it's going to be deployed, how can we get excited for it when all that's left are questions?

Renault listed off a range of use cases similar to those proposed by HPE a few months ago that would be made possible with its blockchain data sharing marketplace and we even had a chat with the coach of Marseille's football team live as they trained in their stadium. But all of it is useless with so much uncertainty around the technology which I had hoped would be less foggy in the months after reporting on MWC.

Phillipe Varin, President of France Industrie said that there still needs to be a very clear roadmap and priorities need to be established in order to confidently deploy 5G to the country's 136 industrial territories, all of which are priorities, he said after Richard said businesses need to be planning how they will be using 5G when it comes.

While I'm grateful for the opportunity to see how France's leading carrier and one of the biggest in Europe is tackling 5G's deployment, I'm just getting a little tired of hearing the same schtick under the guise of innovation. I'll be following the company closely, in particular, its interesting commitment to co-innovation which could take the networking fight to Silicon Valley's corner of the ring.