Amazon's human workers are safe for now, but the tide of automation is rising 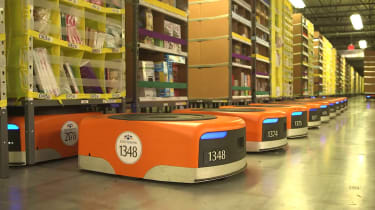 Amazon has dismissed the idea that its warehouses will be taken over by robots any time soon, citing a limitation in the technology rather than a benevolence towards human workers.

According to Scott Anderson, Amazon's director of robotics fulfilment, the company won't have fully autonomous warehouses for another 10 years or so.

Anderson didn't go into detail on what those limitations are or what Amazon might be doing to tackle them, though the company does channel plenty of resources into artificial intelligence services, research and development.

While Amazon said it won't have fully automated warehouses for at least another decade, there remains the question on how much impact a move towards automation will have on the company's human workforce.

In the US, Amazon has 110 warehouses supported by 45 sorting centres and some 50 delivery stations. Combined, the company employs 125,000 warehouse workers.

Even if Amazon was to automate 25% of its warehouse operations, some 31,000 people could find their jobs replaced by robots, meaning the move to automation would still have a significant human impact.

And, with the caveat of speculation, it's not hard to imagine that Amazon will be increasing its use of robots in it warehouses as autonomous technology evolves, which would logically mean some warehouse workers could see their positions get replaced by robotic systems.

Derek Jones, global director of environment, health and safety for Amazon's fresh food division, did note that Amazon is not yet considering using robots to handle fresh produce.

"Just imagine if you want bananas. I want my bananas to be firm, others like their bananas to be ripe. How do you get a robot to choose that?" said Jones.

Nevertheless, the whole situation still raises the challenging question on what impact the adoption of cutting-edge technologies in business could have on humans and society.

Digital transformation strategies to replace legacy infrastructure with more agile and effective cloud systems, can benefit human workers by enabling them to be more flexible and, in the case of the use of analytics systems, spot new opportunities for operational and business improvement. These all come across as uniformly positive moves.

But the pushing beyond the adoption of modern technologies and seguing into the use of cutting-edge tech presents a somewhat grey area. AI systems and robots can help boost business productivity and reduce costs, but at the same time, they could result in human workers facing redundancy later on down the line.

And then there are examples of AI systems making critical mistakes or coming to biased decisions due to the lack of diversity in their developers and the datasets on which they are trained.

With this in mind, it's no wonder that companies aren't rushing towards robotic automation and the likes of Microsoft chewing over AI ethics despite how early the technology is in its development, at least when compared to future-gazing outlooks and the machinations of science fiction writers.