Hitting a home run in business

Can the world of business really learn a thing or two from sport or is it yet another analogy that hinders rather than helps? 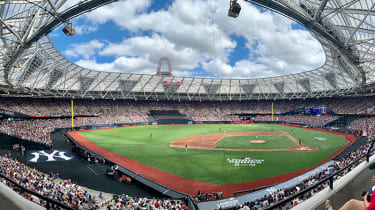 London played host to two very special baseball games at the end of last month. Dubbed the London Series and hosted by Mitel and Major League Baseball (MLB), the games pitted the New York Yankees against the Boston Red Sox in what marked the inaugural European regular season fixture.

I attended the game on Sunday 30 June. It was pretty epic with lots to see and enjoy before, during and after the game itself. I was hoping the Red Sox would win but alas that wasn't meant to be.

Prior to the big game, I spoke with Mitel's UK managing director, Richard Roberts a conversation that definitely got me thinking about the links between the sporting world and the world of business.

Mitel is MLB's official business technology and communications partner, meaning it provides crucial tech for all 30 of the League's ballparks in the US rather than simply a one-off engagement for the London Series.

"MLB is like the Premier League. It's much more than a simple advisory. It dictates the technology that needs to be employed in terms of consistency. Technology is totally and utterly embedded in baseball," Roberts told me.

Attending the baseball and talking to Roberts highlighted the parallels between how businesses work fueled by technology and how individuals must come together and work as a team to win at a given sport.

While the tech in play at the baseball is deliberately overt, often, as Roberts reiterated to me, in business this is quite the opposite. Users don't care about the nuts and bolts; they just want something that works and helps them do their jobs.

That said, in MLB while the tech is visible, it's not intrusive. That remains a key factor in success or failure across the board.

In much the same way as sporting teams need to all pull in the same direction, technology must become a bridge rather than a barrier to productivity. Furthermore, various business stakeholders line of business plus IT must all work together to achieve a common goal. It's a case of out with the siloed approach and it with a much more collaborative one.

Someone must always lead though, whether that's the CEO, a project stakeholder or someone else. Much in the way as every sporting team needs a manager and a coach: Someone to set out the vision and show what needs to be achieved, then empowering those in the team to play to their strengths to achieve just that.

The worlds of business and sport share other similarities, too, in that both are formulaic yet unpredictable at the same time. In baseball, for example, you know the format of the game and the rules, but the game itself will play out differently each time depending on the players, the weather, the crowd and so on.

In the corporate world, you can have standard operating procedures, sell certain products and have control over your internal structure, but you have to be able to evolve to the changing external market dynamics and landscape. This is particularly so in the digital era where new market entrants, fuelled by accessible and cost-effective technologies such as cloud, are able to spin up almost overnight and disrupt the world as you know it.

Some of the tech industry's business leaders have already acknowledged and responded to this and sport has also played a key role in their lives. Indeed, Meg Whitman reportedly captained the school swimming team, in addition to playing quite a few other sports, and Mark Zuckerberg was into fencing while a student. In fact, far from enjoying the oft-solitary sport, he was captain of the fencing team.

There are other links between the sporting world and the tech industry, too. Oracle's founder, former CEO and current CTO Larry Ellison is passionate about sailing so much so he formed Oracle Team USA back in 2003 to compete in the America's Cup. Late last year, he launch SailGP, a new global sailing series designed to give the America's Cup a run for its money.

It definitely takes talent and ambition to get anywhere in the world of business and sport. Some may argue that's why many of the top business people have also played some form of sport while at college.

While I agree with the link, I don't think the captain of the rugby team is necessarily a dead cert as a business leader.

Indeed, Elon Musk is incredibly successful and rich yet he wasn't very interested in sports as a kid at all, according to Ashlee Vance's biography Elon Musk: How the billionaire CEO of SpaceX and Tesla is shaping our future.

"Musk's lack of interest in sports left him isolated in the midst of an athletics-obsessed culture," Vance wrote.

Whatever opinion you may hold about the companies all of the above-mentioned lead/have led, there's no doubting they are strong examples of successful leaders. I'm off to learn how to play hockey whilst reading CEO for Dummies...