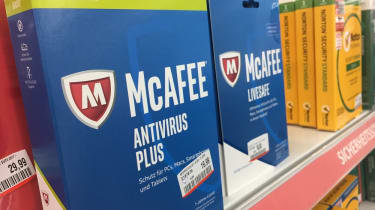 Anti-virus software developer McAfee is suing Dixons Carphone for failing to honour an agreement to promote its products, claiming it will cost the company more than 30 million in lost sales.

The US firm also claims Dixon Carphone is marketing rival provider Symantec, instead.

This is according to a High Court writ against the retail chain, first reported in The Times, that alleges it breached a deal where it would exclusively market McAfee as an add-on purchase for customers who bought hardware from Dixons Carphone.

It's reported that possible compatibility issues with Windows 10s, Microsoft's slimmed-down operating system, are the reason behind the alleged breach of contract.

Microsoft's May security update was said to have caused problems for McAfee and a number of other software providers. The tech giant released a second patch to resolve the issue, but problems still persisted for McAfee users.

"Microsoft and McAfee have identified an issue on devices with McAfee Endpoint Security (ENS) Threat Prevention 10.x or McAfee Host Intrusion Prevention (Host IPS) 8.0 or McAfee VirusScan Enterprise (VSE) 8.8 installed," said Microsoft, in a July bug report. "It may cause the system to have slow startup or become unresponsive at restart after installing this update."

McAfee has argued that this did not justify Dixon's alleged move to stop promoting its products. A company memo is said to have told staff to "ensure all McAfee anti-virus products are only displayed in the McAfee software bay and nowhere else," according to The Times.

The security software company, which is owned jointly by Intel and TPG Capital, said it signed a four-year deal with the retail chain which is set to expire in April 2021. Dixons said it was unable to comment on an ongoing legal case, but it has been ordered to pay 100,000 in costs and has until the end of the week to submit its defence.