Forrester encourages businesses to automate to survive the impending recession 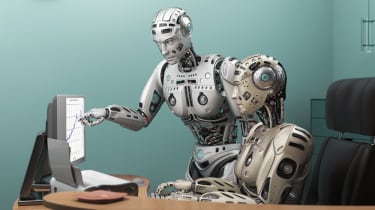 When businesses embark on their recovery from the economic downturn as a result of COVID-19, they should lean on technologies such as industrial robots and robotic process automation (RPA).

Ramping up investment in artificial intelligence (AI) and automation will naturally follow any global recession sparked by the pandemic, according to a report by the analyst house Forrester, given the huge cost of keeping people in work.

It’s crucial, therefore, that organisations bear in mind the human cost of these crucial technological investments, and seek to mitigate the negative effects on the workforce.

This will be particularly challenging with automation now an imperative as far as the boardroom is concerned, with CEOs demanding their business leaders strategically focus on risk mitigation and recovery.

“As companies have recovered their revenues and reopened their supply chains, they have increasingly invested not on rehiring the workforce but on automation and on reducing their dependence on manpower,” said principal analyst with Forrester and author of the report, Leslie Joseph.

“We do not expect the aftermath of this recession to be different. What’s changed, however, is the enterprise coverage and strategic value of automation technologies.”

Global shocks are often followed by jobless recoveries, based on historical data, with unemployment surging and generally taking many months to recover to normal levels. In many cases, such changes are permanent, with the UK, for example, shedding 25% of supermarket assistant jobs due to automation between 2011 and 2017 following the global financial crisis.

The COVID-19 crisis has added urgency to the trend of investing in technologies that fuel a vision for ‘the future of work’, Joseph added, with automation now seen as a tool for risk mitigation and business resiliency.

Job polarisation will accelerate as a result, however, with those at the highest risk of being lost to automation being routine roles with a cognitive aspect, including sales, administration and support roles.

Increased spending on research and development, as well as the implementation of technology such as drone-based delivery and AI-controlled service robots, will put yet further pressure on the recovery of ‘manual’ jobs.

Building a strong foundation for AI

Forrester has recommended that businesses do all they can to survive the economic storm. The measures include improving crisis response protocols, working with suppliers and partners to manage the business impact, explore new sales channels and embrace digital intelligence channels.

Organisations must also respect and retest their older automation plans, which have most likely changed as a result of the pandemic. Localised investments in technologies like chatbots or RPA should be assessed, with evaluations made based on the broader impact of revenue, cost and risk in these changed circumstances.

Crucially, however, to avoid negative effects on businesses as well as the workforce, companies should avoid automating for its own sake and instead do so in a measured way bearing “empathy” in mind.