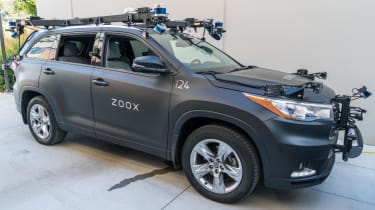 The Wall Street Journal’s reporting that Amazon is in “advanced talks” to acquire autonomous-driving company Zoox. The companies are reportedly discussing an acquisition that would cost Amazon less than the $3.2 billion valuation Zoox received during a 2018 funding round. According to those familiar with the closed-door talks, the deal between the two companies is still weeks away and “could still fall apart.”

Founded in 2014, Zoox has focused its efforts on developing the hardware and software needed to create electric-powered robot taxis that could be summoned by a smartphone app. Over the years, though, Zoox has struggled to reach the funding level needed to achieve its goals. According to WSJ, “A successful deal could give new life to a once-high-profile startup that has seen its fortunes dim as it struggled to raise money.”

While Amazon has yet to comment on the news, a Zoox spokesperson shared with WSJ that the startup “has been receiving interest in a strategic transaction from multiple parties and has been working with Qatalyst Partners to evaluate such interest.”

Zoox emerged at a time when Silicon Valley investors were intrigued by the thought of autonomous taxis and delivery vehicles. Ultimately, interest in the company has waned as co-founder Tim Kentley-Klay was unable to secure the kind of investments Zoox needs to keep pace with its better-funded competitors. The Zoox board removed Kentley-Klay from the company in 2018.

Should Amazon acquire Zoox, it wouldn’t be the company’s first foray into driverless tech. Amazon previously created a team devoted to driverless technology and has made several investments within the space over the last few years. The company recently participated in Aurora Innovation Inc.’s $530 million funding round and made an investment in electric-car maker Rivian Automotive.