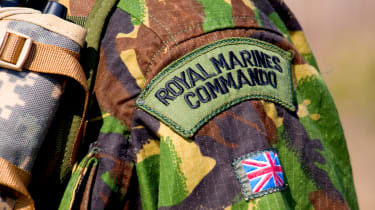 Leaving military service and returning to civilian life can be a challenge for some servicemen and women. Having been trained to have a very specific set of skills and nurtured through a strict, hierarchical career, the transition into the more fluid and less structured working life of civvy street can be a daunting task.

Invariably there will be transferable skills, but reworking them for corporate life can be a difficult proposition. This is something former Royal Marines commando Neil Williams understands.

"Fewer than half of employers view military service as favourable, whilst 8% state they view it as unfavourable," he tells IT Pro. "Statistics such as these can cause issues for those looking to transition from military to civilian life."

To tackle such challenges, Williams founded Crucial Academy, an institution that provides ex-military members with free cyber security training, based inside the emerging tech hub of Brighton. Covering both offensive and defensive cyber security skills, as well as the handling of information assurance and threat intelligence, the training courses have been set up by former military personnel who have made the successful move into prominent cyber security companies or financial technology firms.

"With many of the Crucial team having recently left the military, we have first-hand experience of the transition into civilian life," explains Williams. "We wanted to give back to the military and so developed the academy as a pathway for those leaving the armed forces looking to begin a successful career in cyber security.

"We do this by teaching students new skills which allow them to gain accreditation in specific areas within cyber security. We then provide them with jobs in their respective fields as well as up to two years of support, including assistance in gaining higher level qualifications whilst in their new job." 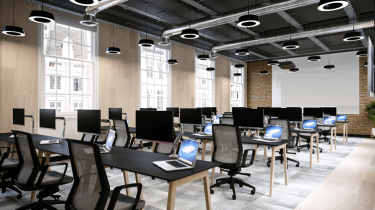 A classroom inside the Crucial Academy in Brighton

Placing Crucial Academy graduates into roles not only removes the task of job hunting for ex-servicemen and women something that might be familiar to those in civvy street, but foreign to people from military backgrounds but also helps eliminate some prejudices former military personnel might experience when looking for work.

Such transitionary training could be applied to other areas of civilian working life, but William's noted that the transferable skills of ex-military personnel can work particularly well in the cyber security world.

"For example, training to think in terms of first, second and third order consequences allows them to effectively assess situations and any possible outcomes," he explained. "This can be applied to cyber security positions, offering the possibility of curtailing an attack whilst ensuring all eventualities are planned for. In addition, veterans possess the personable soft skills required to clearly explain possible threats to somebody who has little technical knowledge, such as a CEO."

Having completed two successful courses so far, which Williams says have been met with positive feedback, Crucial Academy is establishing itself as an organisation that can benefit both ex-military personnel and the cyber security industry alike, especially as the latter is expected to have a global shortage of two million cyber security professionals come 2019.

When it comes to such a skills shortage, academies and well-structured training courses are one way to provide a pipeline of fresh talent into the security world and other sectors crying out for technical skills.

One such successful graduate of the Crucial Academy is 24-year-old Sam Nye, who served for eight years as a communication systems operator in the Army.

Nye tells IT Pro that he had an interest in cyber security stemming from working in an IT and telecoms-related branch of the forces, and as such was drawn to Crucial Academy.

"Having knowledge of both security & IT in general, it seemed the perfect opportunity to combine both in order to transition into a civilian role. That interest, coupled with a growing job market, led me to undertake this training via Crucial Academy," he said.

It would also appear Crucial Academy not only works well at providing free training to ex-servicemen and women, but is a step towards tackling the need for more formal, and affordable, cyber security training courses, which remain relatively few in number. While there are plenty of 'awareness' courses, few offer the in-depth training for transitioning into cyber security roles, something Nye's experience reflects.

"Obviously cyber security has been all over the media for the past few years and is becoming an almost repetitive news story. High profile data breaches and security incidents are constantly in the news but there is a lack of formal training available to help tackle this," says Nye.

Most importantly, Nye's new skills are now being put to the test as he has secured a cyber security role following his graduation from the academy.

"Now I have completed the program, I have been lined up for a role in a well-known UK company, working in [its] cyber security department. I am looking forward to beginning my new career and excited to see where it may lead," he said.

Crucial Academy seems like just the panacea for ex-military men and women interested in technology and cyber security, particularly for those who have no clear plan to transition into the sector.

But it also highlights how some savvy thinking and willingness to look beyond the normal pool of computer sciences and IT graduates, as well as poaching from other firms and nations, could be the key to finding the digital skills modern businesses are increasingly keen to grab and hold on to.