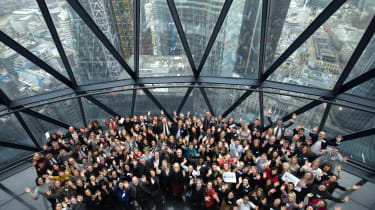 Large companies have a lot to learn on from the recruitment practices and cultures of their smaller counterparts, according to the Tech Talent Charter's (TTC) inaugural report on gender diversity.

Firms with between one to nine employees boast a 53:47 ratio in favour of women, which stands in contrast with the 20:80 average gender split across all other businesses in a range of sectors, from SMBs to large enterprises.

Launching the report at an event in London today, the charity's CEO Debbie Forster celebrated the scale of diversity demonstrated by the UK's smallest firms, suggesting change among more established businesses must come from the top down.

"This really is the first of it's kind," Forster said before a room of TTC signatories, "because, we had stats coming out about the tech industry, but as you know for the Tech Talent Charter we look much deeper than just tech companies.

Forster outlined how TTC signatories are ahead of the curve in terms of gender balance, and the said report clarifies how much work is being done within firms to tackle the issue further.

"We use the lens of gender," she added, "but this is about the wider diversity piste, and also when we look at gender if all you're bringing in is young, white middle-class females it's not diverse."

The report gives a snapshot of gender balance across a range of companies of varying sizes including firms such as Lloyds Bank and Domino's Pizza among the 280 signatories. In all, the TTC represents 8% of the sector.

The vast majority of technical roles held by women across TTC's signatories, meanwhile, are categorised as user-centred design, 48%, followed by production and development, 33%, and data roles, 31%.

Just 2% of TTC's signatories have no diversity and inclusion policies and also have no plans to change this, versus 27% who currently have policies in place. 71% of signatories said they don't have such plans but want to introduce them in 2019.

Lessons to learn from smaller businesses

Forster was joined by a number of speakers on several panels as they broke down its findings, which also presented an analysis of the data captured from its members.

The major difference between large enterprises and SMBs, according to Cogeco Peer 1's president Susan Bowen, is the resources at your disposal to invest in programmes and set up diversity-boosting networks among workers.

"The only way I can really focus on diversity as the president is to put it in my balance scorecard," she told IT Pro. "So I have a key performance indicator at the moment focussed on gender for management and above.

"I have to put that in there to get the focus because I'm too small to have people dedicated to diversity and inclusion, you can't afford to do that. But if you make it systemic in the business measurements then you can drive behaviour."

Bowen, who is also among the TTC's founding members, spent more than 16 years with HP before moving to her position at the cloud-centric firm, a much smaller business.

Asked why microbusinesses are leading the way, she replied statistically more females generate microbusinesses today, and that they tend to perform a variety of rules from marketing to digital. These organisations allow more flexible working routines, she added, and express a more inclusive culture than larger businesses.

Getting a handle on your supply chain

HP's commercial channel director Neil Sawyer, meanwhile, touched on the need to get a handle on gender diversity within an organisation's supply chain, with applicable diversity metrics among measures used to ensure partners are in line with the values HP espouses.

"We recognise that we're a big business in our own right," Sawyer told IT Pro. "But we also have a giant supply chain that we expect to see the same measurements and objectives carried on behalf of HP, regardless of whether you work directly for us, or whether you're a partner of HP within the wider industry."

This comes after techUK policy manager for skills, talent and diversity India Lucas, who helped compile the report, admitted TTC learned during the process that "we don't have any idea" what our supply chains look like.

Also speaking at the launch event were representatives from a number of firms, including Nominet's director of HR Beverley Hamblet-Bowes and BT's leadership, learning, talent and diversity director Anju Sethi, as well as the digital minister Margot James MP.

BAE Systems' global head of diversity and inclusion in the applied intelligence division Theresa Palmer said the difference in the space of a year has been a transition from diversity as an ambition, to concrete efforts being made.

"When I signed on I was really, really confident that we were going to put out this report, that it was going to be useful, for me a really easy sell internally at BAE, but I think it's nice to see people now that are signing on knowing that it's there.

"We have a business now where I work directly for our MD, and I work directly with the other executives and the board members, to say 'how are we going to put this into our DNA?'

"So it's not me going out there and saying 'this is a really good idea' it is me working with each business unit and each MD to say 'what are your goals for the year, and how do we work diversity and inclusivity into that?'"

Beyond the publishing its first benchmarking report, the charity reaffirmed that among its key aims for 2019 was to launch a successful marketing campaign and reach 500 signatories.