Although the event was noticeably light on industry representation 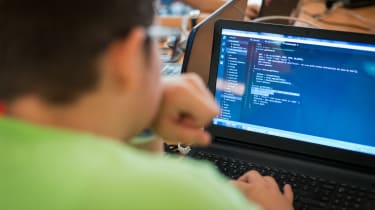 Here's a conundrum: why is it that computer science graduates find it so hard to get a job after university, when there's such a desperate shortage of people with IT skills?

It's one of the questions that the Institute of Coding was set up to tackle and one that featured heavily at the first annual conference of the IoC, held in Manchester last week. Lack of diversity among IT staff and students were also centre stage, as well as what the field of data science might look like in the years to come.

Established last year off the back of government funding, the Institute of Coding initiative was built to bridge the gap between academia and the highly lucrative digital industry. In a video address at the start of the conference, the digital minister, Margot James, highlighted that the UK's tech industry is worth 116.5 billion a year, and is enjoying growth twice that of other industries.

The demand for skilled talent is there, but one of the common complaints that's heard from business is that it's hard to recruit people with the right skills. There is still much debate about whether UK schools and universities are doing enough to produce the talent needed, particularly when compared to schools internationally.

An interesting approach comes from a school called 42, a French non-profit and tuition-free institution that specialises in computer-programming. Based in Paris, 42 was set up to address the mismatch between France's position as the 6th largest economy in the world but only the 25th biggest digital economy. Olivier Crouzet, Dean of Studies at 42, said that education had been disconnected from society as the skills that were being taught were associated with the old industrial revolution.

The 42 approach is notably different from standard teaching: there are no tutors, as lessons are based heavily on project work and, most importantly, on a co-operative approach. "There is a view that collaboration is cheating," said Crouzet, but teamwork has proved essential. Thanks to funding from billionaire Xavier Niel, the school is able to operate tuition-free and is open 24/7, although is considered the extreme of what's possible given enough funding.

To improve the number of people with the requisite skills, however, there's a need to broaden the base of recruits, hence the emphasis on improving diversity. While much of the discussion centred around the need to bring in more women, IoC director Rachid Hourizi spoke of the "diversity of diversity", that gender was just one element in this debate.

For example, Mark Smith, of Ada College, explained how his institution had been established in Tottenham Hale, one of the poorest areas of London, as a means of providing a digital education to children of low-income families.

But there's more to the subject than gender and income. IoC co-chair Jacqueline De Rojas explained that one of the areas that needs to be explored is neurodiversity.

"We need to tackle diversity in all its forms," De Rojas told IT Pro. "In cybersecurity, for example, people with Aspergers or on the autism spectrum can spot trends that we mere mortals can't spot. We'd love people on the spectrum to come forward. But there's a stigma attached and we must find a way to embrace those people."

But turning to the theme of women in IT, De Rojas said that the gender split came early. She highlighted a study by the Girl Guiding Association which found that by the age of 11, only 11% of girls had been given the opportunity to study a tech-related subject, compared to 33% of boys.

"There is a bias in the teaching," she argued. "We need to address this."

She added that there was also a need to educate everyone in digital skills at an early age. She explained that much of the debate is about GCSEs but "it's too late by then".

"By the age of 12, most children have already made up their minds about what they're interested in. We now have to think about how we relook and reshape digital education, aiming at 4-year-olds - or even younger."

One of the areas where there's much debate is in the field of data science, and the conference touched on the idea of preparing the ground to find data scientists of the future. There's common agreement that there's a need for more data scientists, but the issue is clouded by the lack of a firm definition of what the job title actually refers to. As the Open University's Patricia Charlton explained, AI is part of the data science make-up, but the terms aren't interchangeable and are often confused in discussions about machine learning. She added that there was work being carried out to develop a standard definition of data science.

Beyond promises and well-meaning gestures, what stood out most about the IoC's annual technology conference was the lack of industry representation. The Institute of Coding was set up to ensure that the industry gets the digital professionals that it needs, but there was a complete absence of major tech companies or anyone from user organisations. The debates were, on the whole, conducted by pedagogues for an audience of pedagogues. There was plenty of effort involved in analysing the issues, including why there are so few women in IT, but it was sorely in need of input from the other side of the fence.