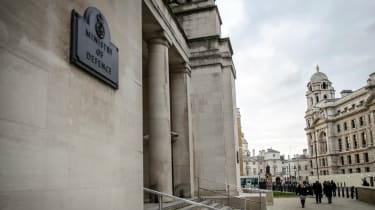 The Ministry of Defence (MoD) has appointed Professor Dame Angela McLean to be its next chief scientific adviser, marking the first time a woman has been selected for the role.

In her new position, McLean will oversee the MoD's core research programme, lead technology strategy, and work closely with the government's Defence Science and Technology Laboratory to develop "battle-winning capabilities".

The appointment was made on International Women in Engineering Day, which aims to raise awareness and boost the profiles of women working in the industry.

"It's poignant that we appoint Professor McLean as our first female chief scientific adviser on International Women in Engineering Day, where we look to increase female participation in Science, Technology, Engineering and Mathematics," said Defence Secretary Penny Mordaunt.

"As a highly respected scientist, Professor McLean is a role model to all those wanting to pursue a career in this area, and will bring extensive knowledge and expertise to the role."

McLean's appointment is a step forward to improving the position of women in the engineering sector, which much like the technology industry and other STEM-related sectors are currently male-dominated.

However, more women are still needed in the sector to help deliver major transportation projects such as the expansion of Heathrow Airport and for the ongoing work on HS2.

This was highlighted by the Department for Transport's call for more women to consider a career in engineering, not only to address an estimated shortfall of 341,000 jobs in the sector by 2033 but to also buck the clich of engineering jobs being filled with "men in hard hats".

"We want to challenge traditional perceptions of engineering to ensure our transport industry has the skills it needs for the future," said Bernadette Kelly, Permanent Secretary at the Department for Transport.

"This isn't just the right thing to do, it's necessary for engineering and transport to thrive. We simply need more engineers and people in the industry as investment grows. Currently, we're not making use of a huge section of society and that can't continue."

HS2 minister Nusrat Ghani noted that more engineers are needed from "all corners of the country" to deliver upon the UK's transport ambitions.

"The engineering and transport worlds have been too male for too long. A more diverse workforce will not only mean more opportunities for women but will help the industry reach its potential," said Ghani.

This is a similar situation to one that the technology industry faces when it comes to encouraging and employing more women in tech.

However, appointments of women in key roles such as that of McLean at the MoD should serve as role models for other women considering STEM-related careers.

But more effort will be required if things like unconscious bias and perceptions of STEM-based careers being male-centric are to be overcome.