The Tech Talent Charter concedes the road ahead is long, but data shows it’s getting longer 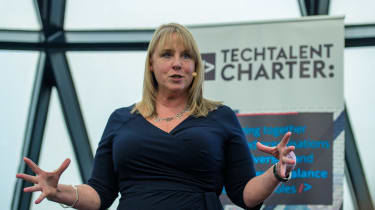 Gender diversity among UK tech firms dipped during 2019, according to the Tech Talent Charter (TTC), despite an increase in the ideas and initiatives aimed at raising the proportion of women holding technical roles.

Women held just 24% of tech roles among TTC signatories last year, a 2% dip against comparative figures from 2018, according to the organisation’s second annual benchmarking report. This decline can be attributed to a sharp reduction in the gender balance within micro-organisations.

“The good news is that we’re still ahead of the game at 24% women,” the TTC’s CEO Debbie Forster told signatories at an event to mark the release of the organisation's latest benchmarking report.

“It ain’t 50% so we’re not there yet, but we are on the way and we’re ahead of the game nationally so we can already feel pleased – but there’s lots to do.”

Microbusinesses, which employ between one and nine employees, were heralded for leading the way after the release of TTC’s first benchmarking report last year, celebrating more than 50% female representation in tech roles.

Due to the size of these firms, however, staffing levels and the proportion of men versus women are likely to fluctuate more sharply than in larger companies.

The dip in the proportion of women in UK tech can also perhaps be attributed to an increase in the number of signatories to the TTC, rising from 280 to 300 over the course of 2019, and an expansion in the number of workers surveyed to 700,000.

Nevertheless, the organisation says gender diversity among its signatories is still much higher than across the wider UK economy, with 16% of women holding technical roles across businesses generally. 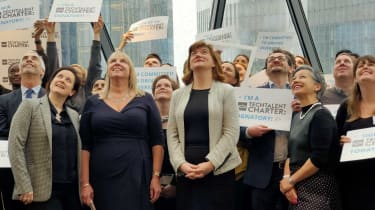 Ignoring a disappointing drop in representation within micro-organisations, the picture is healthier for the wider business community. Small and large firms, in particular, saw their efforts render modest growth in gender diversity.

Small companies saw the sharpest rise in the proportion of women and those who identify as non-binary holding tech roles, from approximately 21% in 2018 to 30% last year, with even large companies experiencing a 5% rise from 19% to 24%. Figures among medium-sized companies remained stagnant, however, at 24% versus 23%.

These figures are reflected in data published in December 2019 that showed the proportion of women in STEM jobs has been flatlining since 2009. Figures from the WISE campaign showed that for 2019, the percentage of core-STEM roles filled by women declined slightly.

Attendees from a wide range of businesses at the event also shared specific ideas and initiatives to boost gender diversity.

While there is “no magic bullet”, schemes based on returners and retraining have proven very effective for firms that have adopted them, with 75% of these signatories boasting a higher than average degree of female representation. However, 49% of signatories have no such programmes in place and have no plans to change this.

Targets for women on interview shortlists was another recurring theme and has led to demonstrable success, although just 14% of signatories have taken up this particular measure and only a further 24% of signatories plan to introduce targets during 2020.

“What was really exciting was to see the data bear out what we’ve been saying all along,” Forster continued. “[There’s a] positive correlation on having that diversity and inclusion policy, and a strategy – not just a piece of paper – but a strategy going through.

“We talked a long time about setting targets around those diverse shortlists. The companies that are doing that are moving ahead. And the real game-changer, if you haven’t already [introduced them], are returns and retraining programmes.”

When it comes to specific strategies, the most successful, according to the report, are those based around education, spanning from mentoring to bias training.

Running events has proven a success among some firms too, as has other companies changing their branding to be more gender-neutral. Rolling out flexible working policies, too, has encouraged a greater degree of gender diversity within organisations.

For Kirsty Keck, chief product owner for tech talent with Nationwide, efforts to eliminate unconscious biases have been ineffective because the overarching approach has been fundamentally misguided.

“There was a sense earlier on of fixing people, and actually it’s not about fixing people, it is fixing the system,” she said. “And that’s where we are at Nationwide, it’s the forensic approach, it’s anything and everything. Look at it, and look at ways of improving it.”

Nominet’s director of corporate affairs Elaine Quinn, meanwhile, advocated the benefits of drawing up targets for female inclusion in interview shortlists, adding while this has been difficult to implement, the rewards have been clear.