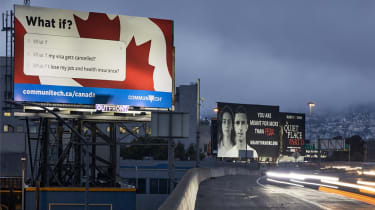 A Canadian company that advocates for the country's tech industry has spent $100,000 on a set of billboard ads in Silicon Valley to attract anxious tech workers to migrate.

Kitchener-based Communitech has purchased nine full-size billboards stationed around Highway 101 from San Francisco to Santa Clara in California, according to The Canadian Broadcasting Corporation (CBC).

The firm wants to entice workers who might be worried about their visa status following changes made by the US government. The billboards ask: "What if my visa gets cancelled?" and "What if I lose my job and health insurance?". They have a Canadian flag in the background and the website address for Communitech along the bottom where applicants can get information on Canadian work permits and access to job opportunities across the country.

The campaign refers to the recent suspension of some work visas by President Donald Trump, which includes the H-1B visa - often used by those in the tech industry.

"All these people [who] potentially won't be able to work in America are absolutely top talent from around the world," said Communitech CEO Iain Klugman. "The message we're trying to deliver to them is to say, 'Hey, you know what, if you can't work or you lose your job, we would like you to think about Canada.'"

The H-1B visa is used for graduate-level workers in speciality occupations and its suspension has been met with a brief filed by a list of 52 tech leaders at a district court in California.

Apple CEO Tim Cook is noted in the brief as being "deeply disappointed" by the executive order and quoted as saying: "This nation of immigrants has always found strength in our diversity, and hope in the enduring promise of the American Dream. There is no new prosperity without both," according to Apple Insider.