Telepresence for small businesses on a budget

New communications models are revolutionising business. Here's how you can reap the benefits without a huge upfront investment 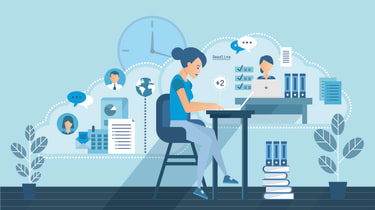 The old ways of working don’t work any more. Now that fast broadband is the norm, city-centre offices are an expensive luxury. New starters fully understand the benefits of remote working and are often put off by traditional cultures of “presenteeism”, where bosses demand that staff be physically on site just to keep an eye on them.

That sort of attitude isn’t merely unhelpful – it’s counterproductive. A study by Stanford University’s Nicholas Bloom split 500 staff into two groups: a control group who continued to work from the offices of a Chinese travel agency, and an equal number who worked from home. Bloom observed that those based at home routinely worked longer hours than those in the office, while taking fewer sick days – and they were 50% more likely to stay with the company. At the same time, smaller offices enabled the agency to save $2,000 per head every year.

The challenge that remains is communication. When staff aren’t in the same building, they need ways of communicating as easily as possible. That’s led to a growth of telepresence services and hardware, but until recently the cost has put these out of reach of smaller businesses.

Today, small firms that haven’t been able to invest in telepresence facilities find themselves in an enviable position. There’s a boom in free or low-cost solutions that are resource-light and feature-rich. Open standards are driving increased competition and direct integration, with software and services already in use in businesses around the world. And with no existing investment in proprietary on-site equipment, there is no imperative for small companies to continue with their current solution until it’s been fully depreciated – or until the board can be convinced to sign off on its replacement.

It’s possible to set up telepresence facilities within a small business at no cost, and without a dedicated team to oversee its roll-out and maintenance. For those that decide that a paid-for solution is the best option, meanwhile, the savings made in rent, travel, staff turnover and sickness could well see those costs recouped in short order.

Here are some of the best free and low-cost solutions for bringing a diverse, remote workforce together.

The most flexible of these solutions are provided by companies for whom messaging and presence are just part of a wider offering. Office and Windows are Microsoft’s cash cows; social networking is how Facebook makes its money. However, 3CX is different. Its core focus is a unified communications system built largely on the Session Initiation Protocol (SIP), which underpins most VoIP applications. Its service can live in the cloud or on-premise, running under Windows or Linux. It can even be hosted on a Raspberry Pi.

3CX’s offering delivers voicemails to inboxes, faxes as PDFs, and lets users see at a glance which colleagues are available. This is more intelligent than it sounds, allowing staff to tag their status with messages like “back at five”, so team members can avoid chasing them when they’re not free.

“Click to Call” extensions for Firefox and Chrome transform phone numbers on web pages into clickable links, which dial out automatically. But perhaps the smartest integration, works in the opposite direction, integrating the company’s website with its back-end systems so staff can chat with web visitors directly, not just by text but also voice or video call.

Pricing is determined not by how many users you want to connect, but the number that needs to connect simultaneously. Keep that number below eight and the standard service is free, after which Pro and Enterprise plans charge on a per-seat, per-month scale, which gets cheaper per user as your company grows. These plans also include features such as call recording, Office 365 integration and up to 250 web conferencing participants.

Cisco’s Jabber communications platform is perfect for a BYOD organisation. It can be installed on all types of consumer hardware, and includes phone integration, videoconferencing and visual voicemail. Participants can even control far-end cameras to show specific parts of the room to which they’re talking, as well as the room in which they’re sitting.

Jabber clients are available for Windows, Mac, iOS and Android, and in 2019 it underwent a redesign to bring it into line with Cisco Webex Teams. The two are fully integrated, allowing different parts of the firm – and members within a team – to use whichever they prefer, seamlessly.

If the name sounds familiar, the original Jabber protocol – now renamed as the Extensible Messaging and Presence Protocol (XMPP) – has been a significant player in presence and messaging since the early 2000s, and the technology on which Cisco’s implementation is based is open-source, with all transactions encrypted using industry standard SSL/TLS connections.

Cisco isn’t the only player in this market. Polycom is also building powerful telepresence conferencing products specifically aimed at smaller players. Its RealPresence Desktop Video Conferencing Software provides on-the-fly conferencing tools on a regular PC, saving businesses the capital outlay of equipping meeting rooms with screens and cameras. It incorporates acoustic fencing to isolate participants’ voices, backlight compensation, and simple provisioning for up to 50,000 users at a time. It will also connect to room-based video hardware for teams in which some work remotely and others are office-based.

Perhaps the best-known business collaboration tool, Slack began life as an internal project for game developer Tiny Speck, which needed an online space where its team could virtually meet to work on a game called Glitch. The game wasn’t a huge hit, but the collaboration tool was so successful that it was spun off as a separate product, and the company renamed itself Slack Technologies.

Alongside persistent messaging, Slack allows users to share files and participate in video calls, and boasts useful integrations with Google Drive, Trello and more than 150 other services, including Outlook Calendar and OneDrive. A big part of the appeal is that anyone can use it for free – there’s officially no limit to the number of users a business can register without paying a penny. This has helped the platform grow to more than ten million daily active users.

There are a few catches: the free plan only keeps the most recent 10,000 messages, only allows for one-to-one video calls and up to 5GB of storage, and doesn’t have screen-sharing capabilities. Those are enabled in the Standard (£5.25 per user per month) or Plus (£9.75 per user per month) plans, and you can include up to 15 participants on any video call.

A key strength of Slack is the way it minimises digital noise by dividing conversations into separate channels. These can be organised by subject, project, client and so on, and new channels can be opened up for specific issues. As Slack points out, members “can join and leave channels as needed – unlike lengthy email chains”. Integrated direct messaging also helps to keep exchanges focused.

While most communication will be internal, Slack can also facilitate external collaboration, with team members sharing access to channels with participants outside of the host organisation. Perhaps the most attractive thing about Slack is that it’s a solely software-based solution, with clients for Windows, macOS, Linux, Android and iOS. This makes it effectively free to deploy.

Teams is self-evidently positioned as a competitor to Slack; it emerged after Bill Gates and Satya Nadella reportedly nixed a plan to acquire the latter for $8 billion. This was likely a smart move, as Microsoft already owned Skype, which contains much of the technology needed for business communications. Indeed, Microsoft plans to retire Skype for Business in 2021 and replace it with Teams.

The tool brings together multiple core business tools in one interface. VoIP is a given and it’s supplemented by regular telephony, allowing users to dial landline and mobile numbers from within the client. Both public and direct messaging are supported, and hosted meetings can be set up on the fly, with plugins for Outlook allowing meeting administrators to invite other members to participate. Other plugins, known as Connectors, draw in data from third-party services such as Twitter and Mailchimp.

A big attraction of Teams is its close integration with Office and the Office 365 subscription platform. That doesn’t mean you need to be an Office subscriber to use it: the free version is available to anyone. But sign up for free and you’ll get not only the Teams app, with full support for online audio and video calls for up to 300 users, but also access to web versions of Word, Excel, PowerPoint, and OneNote.

Upgrade to the Office 365 Business Essentials package (£3.80 per user per month) to get web-based Outlook access and scheduled meetings, as well as OneDrive storage. For £9.40 per month, the Business tier includes web and desktop versions of Office applications. Teams is available as a web app, or a locally hosted app on Windows, macOS, Android and iOS.

Workplace from Facebook started out in a similar way to Slack: originally an in-house product used by staff to discuss projects, it was shared with the public in beta form in 2015, and became an “official” product just over 18 months later. The Royal Bank of Scotland was one of the first big companies to sign up, and it’s now been joined by Starbucks, Spotify and 30,000 other organisations.

For Facebook, Workplace is a logical brand extension. The company already has plenty of experience of bringing users together, helping them share status updates and running a newsfeed. That newsfeed, which sits at the heart of the system, uses AI to make sure users see what it believes are the most important updates, while the people directory is analogous to Facebook’s profiles and Workplace Chat offers a business-focused alternative to Facebook Messenger. There is also automatic content translation and live video (as found in Facebook), along with multi-company collaboration, letting users liaise with suppliers and other contacts outside their corporate workspace.

When you’re using a free account, each member gets 5GB of storage and there’s no limit to the number of staff who can sign up. What’s more, like Slack, Workplace features built-in integration with OneDrive and Google Drive. Microsoft Office isn’t included by default, but these integrations and dozens more are available to paying users. Paid accounts start at $4 per user per month, but the Advanced tier is available to nonprofits and education establishments for free. The Advanced ($4 per user per month) and Enterprise ($8 per user per month) plans also increase video chat participants from 20 to 50, and lift the per-user storage limit to 1TB and unlimited respectively.

And if you’re worried about privacy, Facebook emphasises that Workplace has achieved certification against ISO27001, ISO27018, SCO2, SCO3 and is fully GDPR-compliant. The platform also undergoes an annual security verification audit, and the company pledges that customer data will never be used to serve ads