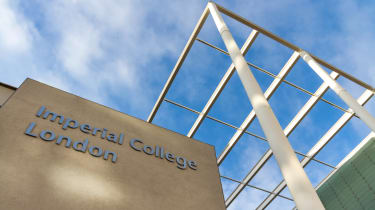 Imperial College London and Huawei have announced plans to collaborate on a new technology project which will focus on research into 5G and artificial intelligence (AI).

The five-year, £5 million partnership will aim to "develop new technology platforms, using 5G for entrepreneurs and startups". It will also see the creation of a new innovation laboratory which will focus on their "joint expertise in AI", according to Ian Walmsley, the provost of Imperial College London.

“Huawei is one of these partners who we've worked with for a long time, and its expertise in wireless technology will help us explore how the digital world will evolve,” he said, speaking at yesterday’s UK Academic Salon, which was organised by Times Higher Education (THE) and supported by Huawei.

The tech company had previously collaborated with the college’s data scientists in 2014.

“Through new collaborations with them we'll use that technology to help a business school simulate online trading for its sustainable business educational program,” he added.

During the virtual event, university academics and Huawei representatives discussed ways to secure the UK’s valuable reputation in higher education in a post-Brexit world.

"This is a perfect example of how the Chinese strategy is to use their money to insert their influence in the world's intellectual thought process," he said.

Sir Kenneth Olisa, non-executive director of Huawei UK, said that politicians have “paid scant regard to silence for generations” and “the absence of any sports on TV” has caused people to “transform into nations of armchair epidemiologists”.

“As a result, science has gotten politicians around the world a whole new topic with ways to raise hopes and fears,” he said in his closing statement at the UK Academic Salon.

“Here, let me give you a quick spot test to deploy when you meet someone correlating Huawei with an espionage risk: just point out that as every AP machine is made in China, surely the ubiquity of the iPhone also poses a major global security threat. You’ll quickly discover that it's not the place of manufacture, which finds a technology security threat, but rather than the nationalities of the shareholders of the board.”

The news of the partnership comes as President Trump has decided to extend the US trade ban on Huawei through May 2021. The executive order declared a national emergency and ultimately barred US companies from using telecommunications equipment manufactured by entities deemed a national security risk.