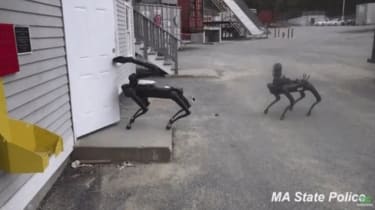 Four-legged Spot robots from Boston Dynamics are being used by the Massachusetts State Police as a mobile observation device to sniff out bombs and enter dangerous environments.

Previously knowns as the SpotMini, Boston Dynamics first unveiled the dog-like robot a few years ago, showing off a smaller and lighter take on a previous quadruped robot with an articulated arm for grabbing and manipulating objects; the robot could successfully open a door and get through it, for example.

The original Spot was more of a technology demo, while the SpotMini was compact and refined enough to be pushed out to organisations keen to put robots to use. This was a move by Boston Dynamics to see how the SpotMini, which has since been renamed to just Spot, could be used in commercial situations.

It now appears one of those situations is for mobile observation by law enforcement. According to a memorandum of agreement obtained by the American Civil Union of Massachusetts, Boston Dynamics has leased the Spot robots to Massachusetts police but did not explain what the robots were being used for.

But Boston radio news service WBUR was told by a state police spokesman that the Spot robots were being used to support state troopers when it comes to dealing with suspicious packages, investigating areas where armed suspects might be hiding out, and carrying out remote inspections in dangerous environments.

“Robot technology is a valuable tool for law enforcement because of its ability to provide situational awareness of potentially dangerous environments,” the spokesman said, noting that Spot was used in two incidents as well as undergoing testing by the police.

There are plenty of concerns around the ethics of using robots for law enforcement and other police duties, with worries around how robots could be weaponised and used against citizens outside of military arenas. And the lack of transparency around the Massachusetts State Police’s use of Spot raises concerns as to whether there are policies in place to dictate how such robotic technology should be used so that it doesn’t infringe upon civil liberties.

Such concerns are not likely to be addressed any time soon, given there are no state-level laws or regulations around the use of robots in policing in Massachusetts.

How AI and automation are changing the way work gets done

Intelligent automation will be a defining factor for the future workforce

On the other hand, Massachusetts State Police’s use of Spot demonstrates how digital transformation in policing can go beyond the more established practices of shifting infrastructure to the cloud or making use of cutting-edge data analytics suites.

Another example of this can be seen with Police Scotland’s use of a fleet of drones to find missing people in difficult environments. As such, it is likely that more robotic and semi-automated technology will find its way into police forces across the Western world in the not-so-distant future.