What's next for sustainable computing? 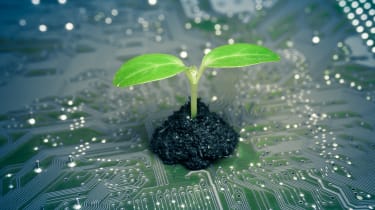 It’s been quite the week for green IT. On Monday, Google announced it’s aiming to go carbon free by 2030 (something 1,000 of its employees demanded back in November last year), while Facebook upped the ante by declaring it will be powered by 100% renewable energy by the end of the year.

Then on Tuesday an experimental Microsoft data centre was raised from the depths of the sea off Orkney.

Finally, on Wednesday Apple announced at its September special event that its Taptic Engine, which generates the iPhone’s haptic feedback, will be made using only recycled rare earth minerals. It will no longer ship charging cables with its Apple Watch units either, ostensibly in the name of reducing e-waste.

It’s an inconvenient fact that our dependence on technology has a negative impact on the environment in multiple ways. While rare earth metals aren’t actually as rare as the name would suggest – in fact, they’re some of the most abundant elements in the earth’s crust – destructive mining is required to extract them from the ground for use in our devices.

Data centres, meanwhile, require an extraordinary amount of energy to run. Currently, they account for about 1% of the world’s energy consumption, with the majority of that coming from cloud and hyperscale computing. With the increasing use of cloud in particular following the shift to increased remote working in the wake of the COVID-19 pandemic, this will undoubtedly grow. The good news, though, is that data centres have got more efficient over time, with energy usage as a percentage of the global total having largely plateaued since 2015.

It’s encouraging, then, to see some of the biggest tech companies out there taking concrete steps towards reducing their impact on the environment. While it’s important for us as individuals to respect the “reduce, reuse, recycle” mantra for consumption, it’s big businesses and nation states that can make the biggest impact to reduce climate change and mitigate their impact on the environment.

That’s not to say it’s all rosey: Cloud and hyperscale data centres are often sprawling facilities, so there will be a significant ecological impact each time one is built. And, as Facebook has acknowledged, wastewater management is something that needs to be dealt with, for example with closed loop systems. For end users, either as consumers or businesses, electronics recycling needs to become simpler if we want to encourage more people to get rid of old and broken electronics responsibly. For manufacturers, we need to move to a point where using recycled components and elements is more cost effective than mining and manufacturing new ones.

But any step in the right direction is to be commended and this week has shown there’s a lot of possibilities for ecologically sustainable and responsible business in the tech industry.