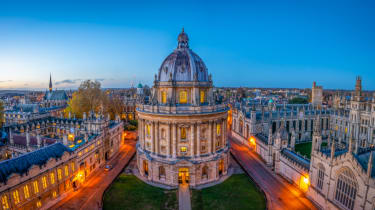 Oxford has received a 150 million donation to build an institute to study the ethics of artificial intelligence, which is the largest single donation for a UK university.

The money came from US philanthropist and businessman Stephen Schwarzman, the chairman of the Blackstone Group, a global private equity firm, who has also worked with President Donald Trump.

Schwarzman made a number of donations recently, such as a $350 million (279m) gift to the Massachusetts Institute of Technology (MIT) to establish a centre for computing and AI. Schwarzman told the BBC he was giving the money to Oxford University because artificial intelligence is the major issue of our age.

"At the moment, most governments are utterly unprepared to deal with this, and why would they be, it's a different type of technology," he said. "They're going to have to rely on great universities like Oxford, and others around the world who specialise in helping them think this through."

Schwarzman said universities need to help construct an ethical framework for changes that are happening rapidly in the technology world. AI, which is powering autonomous technology in all industrial sectors, is often cited as a disruptor of jobs, with many concerned it will lead to prolonged unemployment for certain demographics.

The study of the ethics of AI at Oxford will be in a new humanities centre, bringing together subjects from languages to philosophy. Schwarzman said it was "important for people to remember what being human is".

"Why are we here? What are your values? How does technology deal and interact with that," he said. "We should want it to be positive and productive for society, and technology can't be allowed to just do whatever it wants because it can."

The donation has been warmly received by the University and UK officials. It's even been praised by the father of the World Wide Web, Sir Tim Berners-Lee, who hopes it helps technology and society advance together.

This will be vary valuable. Will hopefully help ensure that technology and society advance in a coordinated way, one which benefits humanity. Congratulations @UniofOxford and, thank you Stephen Schwarzman! https://t.co/VwV8UBsDKM

"This will be very valuable," he tweeted. "Will hopefully help ensure that technology and society advance in a coordinated way, one which benefits humanity. Congratulations @UniofOxford and, thank you Stephen Schwarzman!"