Hundreds of TSB customers have reported issues with its mobile and internet banking services in what appears to be another IT outage for the company.

Over 500 customers had reported issues by noon on 1 April, according to DownDetector, a website that maps outages and service disruption. The majority of the issues, 58%, were for internet banking, with 40% for mobile services. 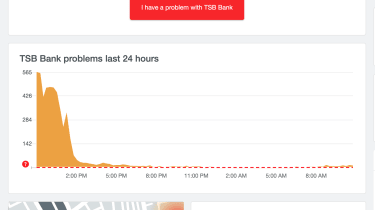 "We've experienced intermittent issues with our mobile and internet services today," the bank tweeted. "All our services are now working but a small number of customers may experience an error message and should try logging on again."

The outage seemed to have been fixed by the early afternoon, however, it was seen as yet another example of ongoing technical difficulties facing the company. In November, customers complained that they had not received their wages and that they were unable to query the issue with TSB's customer services. The bank made promises of 'emergency cash' but without any details of what the problem was.

At that time, the bank had only just recovered from a botched IT migration that resulted in a year of outages and technical troubles, said to have cost the company over £100 million and led to the resignation of CEO Paul Pester. Customers were locked out of accounts for the duration, with some even reporting having access to someone else's statements.

TSB was also criticised throughout for its poor communication – at one time suggesting that it had solved the problem only to be hit with fresh outage reports.

With this latest service disruption, customers have taken to social media to suggest this is a regular occurance with the bank: "Been down since around 6 just coming up unexpected errors. Be joining a new bank. Seems a weekly thing TSB being down," one customer tweeted.

Been down since around 6 just coming up unexpected errors. Be joining a new bank. Seems a weekly thing tsb being down